Well, good thing I didn't pick up much chocolate while I was in California. I've still been kind of off schedule on posts, which means that chocolate posts can really start piling up.

While I didn't visit Eclipse Chocolate itself, I did get one of their bars from Rust General Store in Old Town San Diego. Now, Eclipse Chocolate, unless something has changed, doesn't make their own chocolate. That is, they don't make it from the bean; they make flavored chocolates and bars from the couverture. 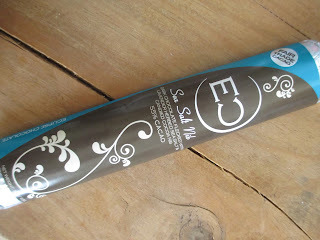 Unfortunately, this chocolate seems a little old. It's a little hard and less quick to melt. Unless I'm reading the blurry best by date wrong (which is possible), it, ah, was pretty close to that date when I bought it. Kind of a shame and kind of odd given that Eclipse is in San Diego, so you'd think that Rust would be able to buy from them more often rather than buying less often, only to have unwanted stock siting on shelves overly long. Then again, I guess it's hard to guess about customers' wants, anyways. You think that they'll want to buy chocolate but then all they buy is candy, perhaps.

Tangent over. This particular bar is the Sea Salt Nib, which is "dark chocolate flecked with lavender herbed sea salt and candied cocoa nib." It's a 55% cocoa. Sometimes, yes, I do get tired of all the salted chocolate. I like salt, but I just get tired of the combination. This bar offers something unique, though. 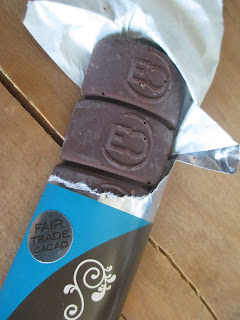 The nibs work well with the salt because when you crunch on them, it feels like it's the salt that you're crunching on. Obviously, though, that isn't the case, because the salty level would be much higher, much too high, if the salt were so greatly crunchy. So with these two elements being there together, the crunch of the nibs is able to highlight the saltiness while also allowing the salt to remain at the proper proportion.

The chocolate is on the sweeter side of dark chocolate, since it is, after all, only a 55%. Not too much, though, just enough to keep the chocolate casual and focused on flavor combinations rather than simply chocolate flavors.

And the lavender? Well, if the label didn't say lavender, I don't think that I would know that there is lavender. I don't know if this is because I'm fairly immune to lavender as both a scent and a flavor. I use a lot of lavender scents at home and the black tea that I usually drink in the mornings has lavender in it. So it might be that I just don't notice it much unless it's strong. Once I'm looking for it, I imagine that I can detect a little bit of that peppery flavor in here, but I'm not certain. Even if it isn't strong with lavender, though, the salt truly is excellent.

The lavender element sounded like it would be the one to push things over the edge here, yet it was the addition of the nibs that made this bar unique. The nibs are what ended up making it stand out and what kept my interest even when other salted chocolates start to leave me bored after a while.
Posted by Deanna Skaggs at 7:23 AM