Walking up to the main area at Out of Africa is often one of the best moments there, particularly on quiet days. You're walking through the corridor between the two safari areas. Sometimes there will be zebras hanging out just on the other side of the fence. Most often, though, you will see either Pilgrim on the right or Kibo on the left. They're the two giraffes and they hang around the fence because the safari buses feed them snacks. 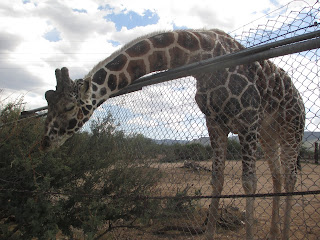 Or sometimes they find their own snacks. On my way out of the park earlier this month, Kibo was reaching his beautiful long neck over the fence to munch away at this brambly crunchy. As in, his neck was just right there next to me. (Although, it can be noted that I have in fact been closer to Kibo before. When feeding him and Pilgrim, I always opt for the "kiss" of putting the celery or leaf or whatever it is in my mouth to hold out to them. And one time, the safari guide brought him inside the bus. That is, she had treats for him inside, so that his neck was literally stretched out in the open space above my lap. Possibly she did this because she recognized frequent visitors and knew we would respect him and not touch him. It's amazing to stare at a giraffe's neck right under your nose.) 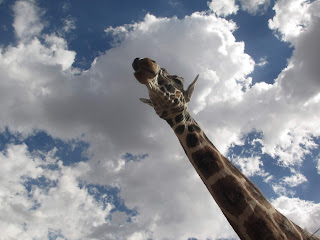 Then he would lift his head up to the sky. It had rained a bit that afternoon, so there were bouncy clouds in the sky, making him look all majestic. 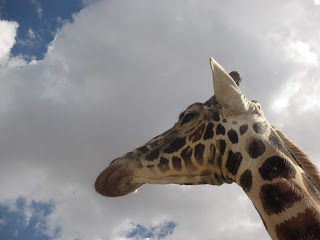 Next time you see a giraffe, don't just say, that's a giraffe. Stare at it and think about what amazing creatures these are. Their thin and long legs, their necks, their ears, their eyes, their mouths, their colors, their patterns. 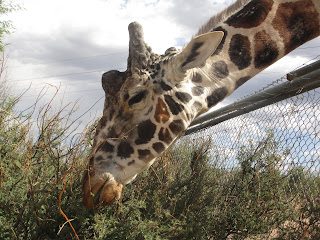 Out of Africa is like a little gift. Getting to see these animals in all their glory, happy and content and gorgeous right before your eyes.
Posted by Deanna Skaggs at 7:23 AM