The Death of Charlie Parker

Given that normally I'm not much of a jazz fan, I did think I might skip Charlie Parker's Yardbird from Arizona Opera's RED series. When I won some tickets at Aria Jukebox, though, that seemed the perfect excuse to go ahead and see something a little different, something that didn't call to me as much. Oftentimes, after all, it's the risks that lead to exciting and new artistic experiences. 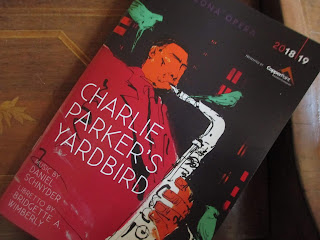 Musically, though, this piece felt more like opera than jazz than I'd been expecting. Maria de Buenos Aires in September, for instance, was the tango opera that had the definite tango feel to the music. I am, however, without any knowledge of music, so this is all I can say on this aspect. I only bring it up to mention that it wasn't the style of the music that ended up keeping me distant.

It was the story. The production takes place after Charlie Parker dies. The concept is that he is writing his last piece, a symphony, before he moves on. Instead of seeing him write a symphony, though, we hear him talk about writing and we see him reliving moments in his life/meeting again important people from his life. And while there are certainly inspirational aspects to his story, mainly his life just came across as incredibly depressing.

A musically brilliant man going up against segregation and discrimination. A boy from a small town who wants to make it big in the city. A man who falls from one relationship into another. A person who finally jumps into the arms of drugs to try and deal. I tend to be a sucker for depressing artist stories, but not of this variety. This plot wasn't really for me, so it was hard to come out of this production either moved or entertained in more than a casual way.

Not to say that there weren't aspects that even I, as I suppose the wrong target audience, didn't appreciate. The performers did well. Stephanie Sanchez as Baroness Nica brought me back to the feeling of Main Stage performances at Symphony Hall. Joshua Stewart as Parker himself had some moments of absolutely sweet and warm notes. Du'Bois A'Keen added a unique element as the dancer giving a visual interpretation of the music. He reminded me somewhat of Emma Shapplin's dancer on her Macadam Flower tour. And this production was a great example of the successful use of projection. They projected onto real bases in order to give the sense of different places while also making each of those places feel solid.

Hmm. I try and make a point of the fact that I don't write reviews; I write reactions. And when it comes to Arizona Opera, I write reactions as a casual yet regular attendee without any knowledge of music or opera. When it comes to Charlie Parker's Yardbird, that leaves me with very little to say. What this production offered to me was a contrast. By being part of the mix, it showed me how wonderful certain other productions are and helped me to see just why they can be so moving.
Posted by Deanna Skaggs at 3:35 PM