I had heard tell, through means of that called the Internet, of some exciting flavors from Theo for quite a while. Given that I don't normally order chocolate, such flavors had to wait until finally I saw them at World Market earlier this year. We'll start off with the Cinnamon Horchata, which is a perfect flavor combination to ease us into fall. 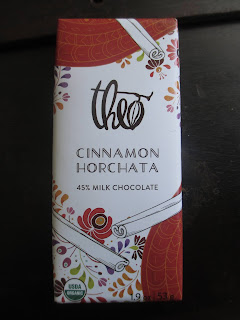 As is usual with Theo, the packaging is lovely. Flowers and cinnamon sticks and red patterns and yet it's all kept against a white background so as to stay balanced and not chaotic or overdone.

Now, I didn't get much of the cinnamon flavor on the first bite until the chocolate was almost melted. It is, though, a good cinnamon taste, fresh and with the right amount of strength. You can taste it in a strong sort of way and yet not in such a way that it becomes spicy. 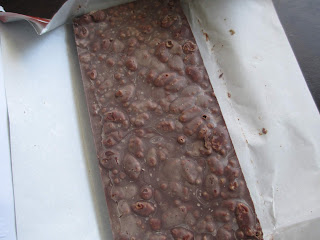 What makes it Cinnamon Horchata, though, you ask? That would be the crisped rice. The odd thing, though, is that Theo has gone with the current trend to use both crisped rice and quinoa. I've already gone over why I don't see the point in doing that, but I also don't understand in this case because rice is what you use in horchata, not quinoa. So if the crisped rice is the only horchata element (and already an element that's kind of stretching the concept), then why take out part of it to use quinoa?

Still, that's all in theory. In practice, the quinoa is indistinguishable from the rice. The crispy texture isn't exactly reminiscent of drinking horchata, though it is true that naming this chocolate Cinnamon Horchata sounds more exciting than Cinnamon with Crisped Rice. So I suppose it works.

Theo makes good milk chocolate, some of my favorite milk chocolates to share with people. This bar contains their 45% milk chocolate, so it's a little richer, which goes well with the cinnamon. And, you know, if you like some crisped rice in chocolate to give it that casual touch, then here it is. Theo does wonderfully with chocolate like this. Chocolate that has a simple flavor (cinnamon in this case) and a touch of uniqueness (the crisped rice) and a solid, quality chocolate base.
Posted by Deanna Skaggs at 9:05 AM