Well, well, banana chocolate certainly has turned out to be almost a new trend, hasn't it? We've gone from no banana chocolate to banana chocolate everywhere. This time it's in the Banana Nut Dark Chocolate from TCHO. And this time there are also almonds, which sounded less intriguing to me, but okay, let's go for it. 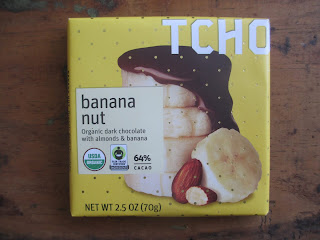 You can see those almonds quite visible on both sides of the chocolate bar. The chocolate comes in with that midway-dark aroma, which makes sense given that it has a 55% cocoa content. On the first bite, I tasted almonds, then some semisweet chocolate chip chocolate, then some salt, and then maybe some banana. The third bite had more banana. Said banana had a feeling halfway between a banana chip and a dried banana. Given that these are in fact freeze dried bananas, that feeling is about right. 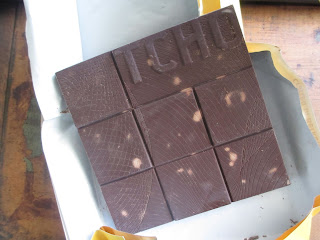 The gist of it is that you get more or less banana in different bites depending on how big or small those bites are and how much banana you're getting in each bite. TCHO definitely did, though, capture the banana taste. Possibly the banana effect is stronger here than in many of the banana chocolates I've been trying. Maybe the banana pieces are bigger? That's hard to tell, though, given that there always seems to be a second texture element, the almonds in this case. I'll get back to those in a second, though.

First let me give a word on the chocolate. I suppose this is dark chocolate instead of milk to give more of an idea of quality but it's that semisweet chocolate chip chocolate, which is nice in its way but makes me feel caught in between two things. I wouldn't have minded just going with milk chocolate.

The almonds I'm not sure about. Whether or not they were necessary is, I suppose, an opinion. I imagine that they add to the concept more than to anything else: almonds sound hip and healthy these days. Though it's also true that if you look at a different side of things, the almonds can instead bring you around to the dessert side. Chocolate chips and bananas and nuts are maybe almond chocolate chip cookies with banana slices and ice cream? Yeah, this chocolate is a decent concept of such a dessert. And TCHO often goes for dessert type flavor combinations, so it fits.