While my experience with the Chocolate Pieces from Little Secrets has been great, so far I haven't cared much for their wafers. But they were one of the fair trade chocolate companies with a new-to-me holiday offering this year, so naturally I wanted to check out the Peppermint Bark Crispy Wafers. Plus, the fact that there is less chocolate in here because of the wafers means that this product checks in at under two dollars, which is pretty unheard of for most of the chocolate I review. 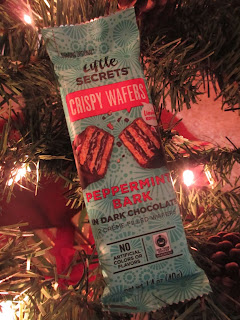 The packaging is fun and colorful. Like with the offerings from Theo this year, this light blue and red color scheme would blend in just fine with standard types of Christmas candies. In fact, it is so much like Theo's colors that it makes me wonder if these are just really popular colors this year or what. 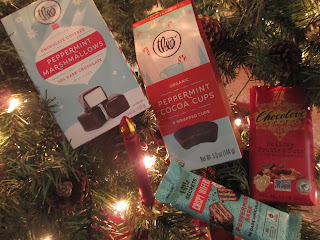 Simple concept here. Two long wafers with a peppermint oil aroma sit inside of the wrapper. Biting in, I found that thicker, crisper wafer that I hadn't favored before (what can I say? I was raised with KitKats like most of us were). Then I got the mint flavor and some of the chocolate and started to get more of a cookie feeling. Looking at you, Thin Mints. 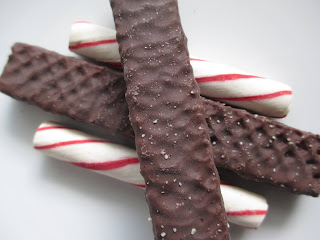 And then, well, what I thought was just a creative thought (like saying that the chocolate tastes like a winter day with snow flurries in the air) turned out to be pretty literal. The chocolate began to feel oily--and Thin Mints use compound chocolate (that is, chocolate watered down with oil). And yes, I found palm oil in the ingredients. In theory, the oil could just be for the filling. On tasting, though, definitely correct me if I'm wrong, but this is compound chocolate on the outside of the wafers. 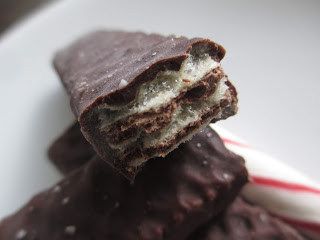 How big of a deal is it, though? It isn't like I won't finish eating these. They taste fine and honestly, my palate has a bigger issue with the harder texture of the wafers than with the oily chocolate. In fact, the oily chocolate can help give some of that greasy, candy feeling that most of us Americans are used to (not that these chocolate wafers are greasy per se, just that they edge more to that angle). The mint flavor is in about the medium range. Strong enough to taste but not too strong. I'm not sure why these are called Peppermint Bark Wafers instead of just Peppermint Wafers. The candy cane pieces on the picture are in fact quite microscopic on the actual product and so are unable to compete with the texture of the wafers.

Taste-wise, they're alright. Probably most people wouldn't overthink them as I am; they'd just eat them. But that being said, I wouldn't want to give these as a gift or stocking stuffer if I don't care for them. What I can say is that if you like Thin Mints, you'll probably enjoy these.

While the whole compound chocolate thing is a big issue for me personally, what does it mean for the product? I already mentioned the low price of this product, comparatively speaking. Using compound chocolate helps keep the actual amount of cocoa used at a minimum--which can be a positive thing as we try and rework the cocoa industry and make sure that it's all happening in such a way that is good for both the people and the environment. We had to admit it, but consuming less cocoa is part of that. And if most chocolate candy especially for the holidays is already compound chocolate, then that means that most of our palates are already immune to its taste.

I'd personally like us to be moving towards better, whole foods and palm oil chocolate just doesn't quite seem to fit into that. But perhaps there are worse things you can do. Perhaps it's a good thing that if we're going to be consuming compound chocolate, we can at least make sure that the cocoa we do use is coming from fair trade sources.

Am I making you think too much about your Christmas chocolate this year? While there may be a million things to think about right now, the chocolate that you're buying is still an important topic.
Posted by Deanna Skaggs at 10:29 AM