I tried to get a head start on seasonal chocolate, but it turns out that I have still a few more to go. Since I don't want to cut it too close to Christmas, I'm going to just put out four holiday chocolates in a row this week. It might be a little much, but I'd rather give each product its own space than stick them all into one or two posts. Perhaps I could have put all of the marshmallows from Theo into one post, but I started off unsure of whether or not I would even review all of them--and honestly, I prefer to keep products individual if I can, unless there is truly nothing unique to say about each one. 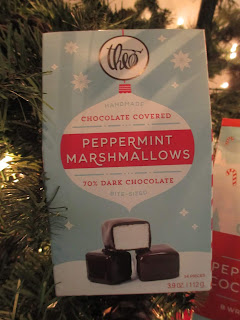 The packaging has gone from a white box to red and now to blue. I thought right away that the chocolate-dipped marshmallows looked a little different in the bag this time. Maybe they were stacked more neatly but the surface seemed different, as well. The reason? The Peppermint Marshmallows are made with Theo's 70% dark chocolate instead of the 45% milk chocolate. So they're naturally a shade or so darker in color. I neglected to notice the difference on the label because I was more focused on the flavors. 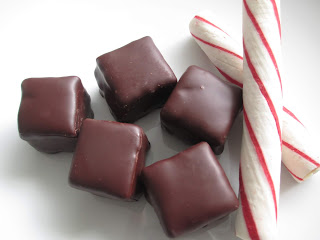 Like with the Cinnamon Marshmallows, you get a chocolate scent (a little darker here) when you open up the bag but no peppermint. While the Cinnamon Marshmallows had a great cinnamon flavor to them, the mint here is still light even when you bite in. On my first one, I don't think I tasted mint at all. Then I tried to press my tongue against the marshmallow specifically searching for the peppermint (since Theo adds the flavoring to the marshmallows, not to the chocolate). That helped, but it's still a very light mint. While some people might like a lighter rather than stronger mint taste, I do have to mark these down for being so light. Unnoticeably light really doesn't cut it when they're called Peppermint Marshmallows--not even "Marshmallows with a Hint of Peppermint." Maybe I got a bad batch? 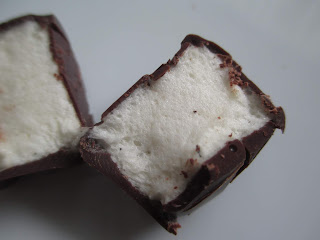 Honestly, milk chocolate sounded more appealing with marshmallows to me, maybe because of my averse associations with confectionery dark chocolate. But the dark chocolate is good with the marshmallows, as well. It's less sweet, and yet that semisweet flavor can evoke cookies, too. So it has more of a wintry feel. Less thoughts of cuddling up by a fireplace and more thoughts of flurrying snowflakes and going out to build snowmen and putting on a glittery dress for a party.

As far as which of the three marshmallows is the best, it's going to go off of preference. Do you like milk chocolate or dark? Do you like plain and classic? Do you like some spiced cinnamon? If you're looking for hot chocolate marshmallows, I'd probably go for one of the milk chocolate options. These would go well with ice cream, though, if you wanted to do a kinda crazy sundae. The Cinnamon Marshmallows were my favorites for eating on their own. The Peppermint Marshmallows would be excellent as part of a dessert board. Whatever you choose, just have fun.
Posted by Deanna Skaggs at 11:13 AM