Last month, I declared Theo's Vanilla Bean Marshmallows a success. Now it's time to take a look at one of the flavored options; the other is Peppermint, but the one I chose is Cinnamon. While both are wintry flavors, cinnamon and chocolate is dearer to my heart than peppermint and chocolate--especially when it comes to marshmallows that might end up in a cup of hot chocolate. 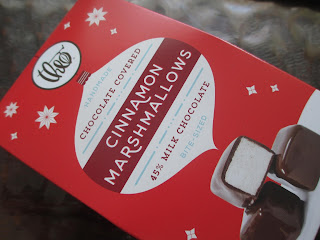 Most everything is the same here. The box has the same cut and design, just with a different color scheme. The red has a jollier, more Christmasy feel, so I'd probably be quicker to reach for this one if I were choosing a gift. 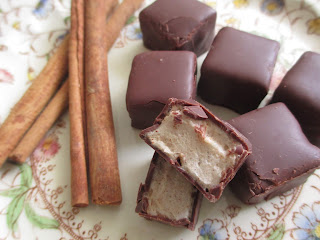 It's everything that you would want in a wintry treat: warm and cozy and sweet. Hot chocolate and wool blankets and fireplaces and all that. But it's also elegant. It isn't just cinnamon chocolate; it's a cinnamon chocolate sweet that hits a particular flavor angle. And so it also becomes holiday gatherings and marble dessert boards and shiny dresses. Essentially, these marshmallows can be whatever you want them to be and they can fit into whatever context you want. The Vanilla Bean Marshmallows I enjoyed; these I'm loving.

They remind me of something Trader Joe's might market. Something that can be casual and comforting or the type of thing you'd take out of the box and serve elegantly without telling anyone that you just bought it from the grocery store. And that's what Theo does with their chocolate bars, as well. That's why they've long been a favorite of mine for introducing people to, for instance, their first high quality milk chocolate. They create good and approachable products.
Posted by Deanna Skaggs at 7:55 AM