While I am aware that not everyone loves the Disney princesses, I'm a literature person, so I view everything from that perspective. The earlier princesses were mainly symbolic--and so were their princes. That is, their stories weren't really love stories, only on the surface level. Let that settle in and change your perspective on Disney princesses.

Anyway. I do like Disney. And the princesses are a part of Disney. I used to think that Belle was my Disney princess. She had my brown hair and brown eyes and she liked to read books--and that craving for something more was also something that I had when I was around twelve years old. And then Tiana came out when I was in college and I thought, oh, I want to be Tiana, that's who I should strive for. She was so hardworking. And then Elena of Avalor came out and I thought, she has my brown hair and brown eyes, not Belle--it's a different look.

And now I'm going back again. Sleeping Beauty is one of my favorite Disney animated films not because I think that it's necessarily the best (though some elements of it are stellar) but because I love the music and the art and the good versus evil theme. And suddenly I find that I am Aurora dancing in the woods. 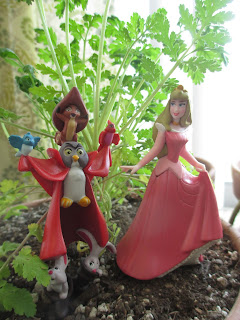 Aurora, just living her life. She's out there in the woods. She's just a peasant girl picking berries that she knows her aunts don't need. She's just enjoying being out there, dancing and singing and dreaming and making friends with who is around her, even if they're the animals. You could say that oh, she's just thinking about finding a man, putting her life on hold until she meets him, thinking everything will be fine when she does. But that isn't really what she's doing. She looks very happy out there dancing in the woods by herself. She's living her life.

And yet she also is being patient, though she doesn't realize to what extent. Even in her dream about finding someone, she isn't moping or pouting or even searching for him, wondering when she's going to find him. She's perfectly happy to just literally bump into him while she's busy with her animal friends. So she was patiently waiting for him. And she was also, unknown to her, waiting for the day when she would return to her true home, to the castle, and to her father the king. The time is long in coming but when the time comes, Aurora goes in just one night from being the peasant girl in the woods to the princess in the castle. Change is slow to come for her but when it comes, it comes powerfully.

And in a sense, that basic moment is something that many of the Disney princesses share--and something we all share in our lives, as well. That's the inspiration we want to receive. No, it isn't about the princes or the dresses or the castles. It's about living with grace and contentment right where you are. That's what makes the Disney princesses beautiful--that's what makes them princesses.

Which Disney princess do you identify with?
Posted by Deanna Skaggs at 8:58 AM