From Black Spire Outpost on the planet of Batuu, we bring Chocolate Popcorn with Crait Red Salt. That is, popcorn from Kat Saka's Kettle in Galaxy's Edge at Disneyland. It used to be called popped corn or popped kernels, but after the vocal minority spoke, Disney changed the names of Star Wars food. No more in universe Fried Tip-Yip (described as chicken in the full description) or the like. Now it's Chicken Tip-Yip and part of the fun is gone, even if the average guest won't even notice the difference. Such is life.

Anyway, the Chocolate Popcorn is part of the new food items they introduced a few weeks ago. Initially, they'd started out with just one kind of popcorn, which is now their Outpost Popcorn Mix. It's the colorful one with different flavors, some of which I liked more than others. It was fun to try, I guess, but I didn't care for it too much. Chocolate Popcorn, though? That needed a review from me for sure. 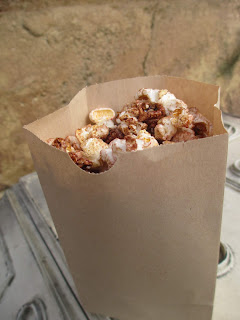 I don't usually (or ever, in fact) get popcorn from Disneyland. I'm not really into all the popcorn butter, popcorn just seems like such an inexpensive and easy thing to make at home instead (I just pop it in a pot and then add salt), and usually if I'm buying I like to spend money at Disneyland on fuel foods and really tempting desserts if I get a dessert or snack. Popcorn just doesn't seem worth it to me. The popcorn at Black Spire is $6.49, which you can compare to $5 for regular popcorn in the rest of the park.

With all of that being said, I would totally buy the Chocolate Popcorn again. 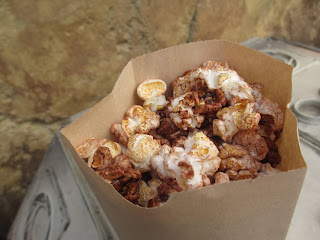 It comes in the usual brown paper bag that Kat Saka uses. Maybe this is part of the reason why I like Black Spire: I just like the earthier aesthetic. Some pieces are coated about medium level, but most are fairly light. So if you're into heavily flavored kettle corn and caramel corn, maybe this won't be for you. But I declare it perfect.

Popcorn is already slightly, almost sweet. So paired with a light layer of chocolate, the popcorn almost becomes a Lucky Charms marshmallow. And suddenly you're eating a light dessert. Just as you're settled in with this light and pleasant snack, you remember that touch of salt on the edges of the flavor, that hint of red you can see on the surface in places. Nothing too strong, just a gentle flavor accent. Salt is easy to overdo and they kept it at the right level. They also found yet another way to bring something in universe into our world. It's from Crait, how cool--but it's also just salt. Perfect.

So I'm totally happy. Get a bag of this to munch while you're wandering around Black Spire Outpost (it's a wandering type of place, it really is, almost not entirely unlike Tom Sawyer Island as an adult) or just before the fireworks start. Now there's a nice image. Standing in front of the Millennium Falcon with the fireworks going off behind the spires and a bag of Chocolate Popcorn from Kat Saka's Kettle in hand. Ah, playing is lovely.
Posted by Deanna Skaggs at 10:20 AM