When it comes to the Shakespeare plays that are more easily digestible to the audience and those that are less easy to follow, Macbeth falls into the former category. Not because it is shallow but because it has approachable concepts: ambition, greed, glory, murder, fear, and horror. You can easily explain the plot in a sentence or two, so you always know at least the gist of what's going on, even if it's your first time seeing the play.

This was not my first time seeing Macbeth performed live, but it's easy to say that Southwest Shakespeare Company (with Drew Shirley directing) found a way to make this a unique performance and yet also one that did not take a less traditional approach. "Less traditional" usually means a modern setting or the addition of music or silly props--that sort of thing. It was traditional in the sense that they kept the time period and kept most of the classic elements, but it was unique because they mixed things up. 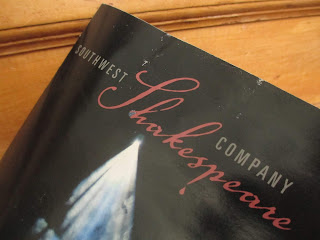 Most notably, the wytches. The three wytches are one, performed by Elizabeth Broeder. She plays a strange, demon-possessed-like creature that feels truly evil and wrong. Instead of three witches dancing around a cauldron (an image with which we are all overly familiar with from fiction by now), they gave us something to disturb us fresh. And she sticks around. She doesn't disappear after the start of the play; she stays, leaking her poison further and deeper, all the way to that final scene, that hint of the offer of evil that the future will always bring to each person.

In their earlier scenes, Macbeth and Lady Macbeth felt more like people, just people. And in their later, haunted scenes, they are us in our darkest moments. They are haunted by horrific deeds that will soon be made public. We may not be doing the same (hopefully not), but we are still, in our darkest moments, hidden and alone, in deep corners wondering how we can ever recover from what we have done or what has been done to us. They are us when we crave escape and don't know how to find it. Kyle Sorrell gave that style of line delivery that pulls you immediately into the feeling of an existential crisis.

On the practical side, the lighting of this show was beautiful, so I must give a nod to Lighting Designer Dallas Nichols. There were shadows of the actors on both walls that extend out from the sides of the stage; this helped to create that eerie atmosphere but also to set up that concept of being watched. The lights on the stage, as well, set up strange color and obscurity and focus, whatever suited each moment. In fact, the lighting was a character of its own.

Now, despite what I'd said, there was a big way in which SSC departed from the traditional. They switched male for female. They made Banquo female. I thought at first they had just cast a woman for the role until another character referred to Banquo as "she." And they switched Macduff and Lady Macduff. So it is in fact Lady Macduff who kills Macbeth. It all went along with the gender concepts in Lady Macbeth's speech; she asks for all of the tender, female parts of her character to vanish so that she can help Macbeth in the dark and evil tasks ahead. So to have her give this speech and then to see both male and female characters taking part in different types of events shows that evil is not male or female, tenderness is not male or female, and both male and female face temptation and the option to choose one way or another, to choose right or to choose wrong. If, however, you are not interested in exploring such gender questions, they did these switches in such a simple way that you can simply ignore them if you wish. That is, they weren't distracting to the main events of the story.

This was one of the best plays Southwest Shakespeare has put on in a while. Partly because it's Macbeth but also because they approached it so well. They made it freshly creepy, and I can say nothing better than that.
Posted by Deanna Skaggs at 1:08 PM