The plan was just to make a quick appearance at the Desert Botanical Garden's Chiles and Chocolate Festival. I'd stick my head in and see what was there, maybe buy one or two things, and then go. Plans change.

When I first when to Chiles and Chocolate two years ago (I wasn't able to go last year), I remember it being quite packed. This year, I got there early on Friday, so the way was pretty clear. It was easier to get to each booth--too easy sometimes. I wasn't there to shop, even though the booths of honey and loose tea and wooden spoons (I love wood) and pasta sauce were just my types of things. They have plenty of salsa and spices and mole and tamales, too, if you want to keep more in theme. Xocolatl was back with their drinking chocolate and Wei of Chocolate with their flower-shaped chocolates. My favorites, of course, are Scottsdale companies Stone Grindz and Zak's Chocolate. I decided not to kid myself and just bought a plain bar from Stone Grindz instead of one of their chile chocolate bars (it may have been for the festival, but that really isn't my favorite zone). 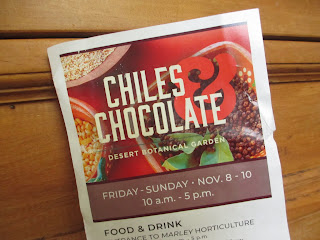 From Zak's Chocolate, I chose two truffles. Then I wandered outside, where I had my eye set on something I'd regretted skipping last time. That's right, the chocolate cotton candy. Spunlight Cotton Candy makes organic cotton candy and while I've since seen them at other festivals, I haven't seen the chocolate flavor again. I'll give another post to the cotton candy.

Now, remember, at this point, I was outside. According to my original plan, it was now time to go. But I'd been so quick and the day was so beautiful and there really weren't too many people in the small spaces, so I regretted leaving so soon. And I thought, well, am I just here for shopping, even though I was trying to restrain my shopping? The cooking demonstrations are weekends only, but there was going to be some dancing in the late morning. So I decided I might as well stick around for that.

Only problem was those two truffles. The chocolate bar would be fine in my purse as long as I kept it in the shade, but the truffles would barely make it home as it was. No way they'd stay around longer. (Zak's does, by the way, sell their little insulated bags at the festival, if you need some extra security.) So I thought, well, let me go to my quiet bench (the one on the path where hardly anyone walks) and take some pictures and take some notes and just review these chocolates right now. 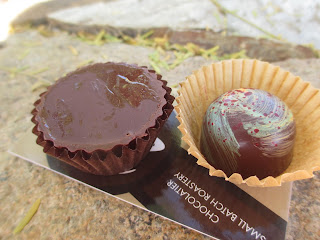 They were the Peanut Butter Cup and a Mango Chile truffle. I know, I said I'd been staying away from the chile chocolates, but I dared for this one. The Peanut Butter Cup was already melting against the top of the little bag. Perhaps Chiles and Chocolate should be held in December or January instead of November?

These were both dark chocolate. The filling of the peanut butter cup had almost more of a ganache texture than the usual peanut butter filling. The taste, too, reminded me more of mazapan (the crumbly cakes of Mexican peanut candy). The specific peanut taste and the creamy factor to the flavor gave it that effect. The dark chocolate base was sturdy. This chocolate just hit right. A gourmet approach to a peanut butter cup, certainly. 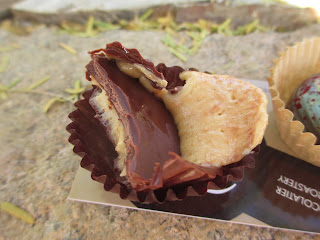 The Mango Chile truffle came looking quite beautiful with green swirls and red spots. This one was essentially one solid piece rather than having a separate inside. All extremely smooth. Though mango is one of the less common flavors to see paired with chocolate, a fresh mango flavor went perfectly with the coolness of the chocolate. The chile was just a slight teasing on the edges; I hardly even noticed it, honestly. Given my general lack of interest in chile chocolate, though, the lack of spice was a plus for me. This was simply a delicious, fruity truffle.

By this point, I still had some time to sit on my quiet bench. I often read at the garden, but I hadn't brought my book, so I just sat. Time for contemplation is good, too.

Then I made my way back over to the festival area to see the dancing. Maybe I'm a little spoiled because I see live performances fairly often these days, but I wonder if maybe the Friday group was not quite as good of a performance as the weekend groups. I almost went back on Sunday just to see. They did have a small space to work with, though, and it was still an enjoyable way to spend the time. The garden on a sunny day, a bit of shopping, and some dancing. I couldn't have Chiles and Chocolate be just a quick stop; I had make a whole morning out of it. That was the nicest way to do it.
Posted by Deanna Skaggs at 12:08 PM