I realize that I say Easter in the title even though this box does not in fact say Easter on it (though Alter Eco's website does call this the Easter edition). In fact, it doesn't say anything seasonal at all. Not spring, not holiday, not limited edition, nothing. But there are colorful eggs and a bunny head, and those are undeniably Easter images. I don't know how much Easter chocolate I'll be looking at this year. This might end up being the only one, or I might go crazy at Black Butterfly or maybe pick up a couple things from Zak's Chocolate--we'll see. So that's why I'm getting an early start here just in case there ends up being more. 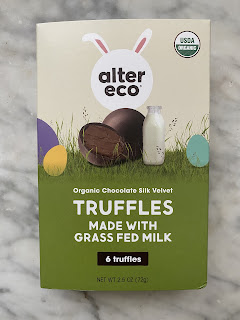 My first instinct was that there was no need for a review. This isn't a special flavor. But I was curious. The packaging isn't really a box; it's some sort of fold-out design. From the outside, you can see a grassy inside, but what else? Would it unfold to create a pop-up booklet or springy scene? My curiosity led to the purchase, thinking perhaps it would be something worthwhile to talk about. As I picked up the first box, though, I did find one of the truffles falling out. So the design could use some reworking for next year: no one wants to risk buying a set of chocolate only to get home and find that some of it has fallen out. 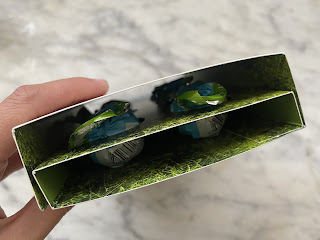 Being that I'm not much interested in all the pink, cutesy bunnies and such of Easter decorations, I appreciate that the color scheme here is based on green and cream and that the design is kept simple. The box opens like a greeting card, just one simple lift to open it up. There you will find the grassy scene and six truffles sitting in little nooks. It's certainly more straightforward than I'd been expecting. The idea is that you're picking up the chocolates from the grass like you would eggs during an Easter egg hunt. 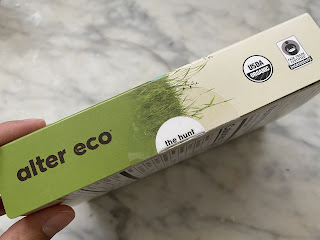 I get the idea and it's a nice idea. But visually I'm not sure. It seems like there is too much effort not to pay attention to visuals. And yet the visuals don't offer much. It isn't a "set out on display" look. It's more of a "open up by yourself and take delight in pulling out each chocolate and eating it" look. Maybe it was designed for someone stuck at home this year and unable to see family for Easter? Or maybe it's simply meant to appeal to adults' nostalgia for Easter egg hunts. (Which reminds me, maybe I'm less than enthused because I don't really have a lot of nostalgia around Easter or egg hunts.) 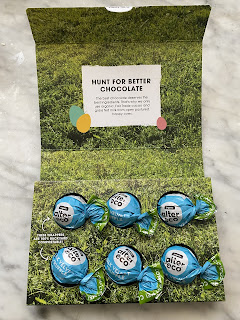 The six chocolates are Alter Eco's Silk Velvet Truffles, which are made with a 39% cocoa milk chocolate. They come wrapped in light blue wrappers proclaiming that they (the wrappers) are compostable. I'm seeing this more and more often now, but the nice thing is that these are supposed to be suitable for both home and commercial composting. So there is actually a chance that more people will be able to compost them if they don't need to be taken to a very specific facility for it. 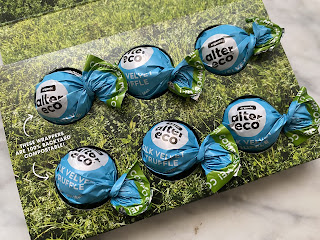 As I've mentioned before, Alter Eco makes their truffles in a style like Lindor--except that they use better ingredients than Lindor. And of course Alter Eco also uses fair trade chocolate, which I consider especially important for Easter. You'll notice, too, that the box mentions the use of milk from grass fed cows. That's great, too: we want healthy animals for any of the animal products we're using. And of course Alter Eco was one of the earlier companies I can remember using (actually the first I think I came across) to use coconut oil in their chocolate. In the case of their truffles, it takes the place of cream so that they can have a long shelf life so that we can buy truffles in a grocery store instead of just from a chocolate shop. (And as an alternative to partially hydrogenated oils and palm oils and all of that.) 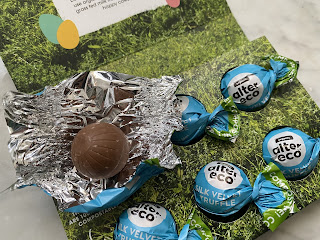 The result is a creamy, smooth truffle. These are light and sweet in the best traditions of mild milk chocolate. There is a richness here, even though the milk chocolate is light and not at all dark. There is also zero coconut flavor; the creaminess remains a dairy creaminess, which is a positive for those of us who don't care for the flavor of coconut. Again, the purpose of using it here is not in order to make vegan chocolate, so there is still milk involved. 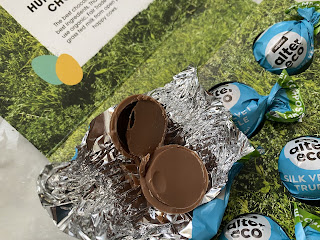 Well, I satisfied my curiosity to learn more about the packaging. And I got six indulgently sweet chocolates to enjoy. So while I wouldn't say that the seasonal/holiday theme was very strong, the chocolate is nice. And I don't believe I've seen Alter Eco do much with holidays in the past, so it makes sense that they would stick to something simple to start with.