Last year I had generally favorable comments about Jelina Chocolatier's Crunchy Pecan Caramel Milk Chocolate. I was unsure, however, how much I would seek this brand out in the future given that they don't make their own chocolate--though I did enjoy how they added flavor. I'm back again now with a fairly similar bar, the Honey Nougat Milk Chocolate. 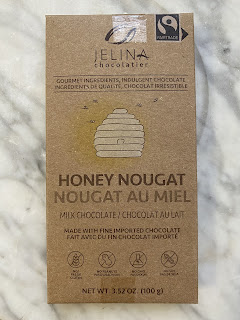 The simple, natural look of the cardboard box is offset this time with an almost white bee hive and a touch of yellow surrounding it. The style of the chocolate bar is the same, as well. The thick rectangles that look like they would be hiding pouches of soft nougat do not: this is simply solid chocolate with specks of crunchy nougat, which you can see peeking out through the chocolate's surface. The aroma is sweet and mild. 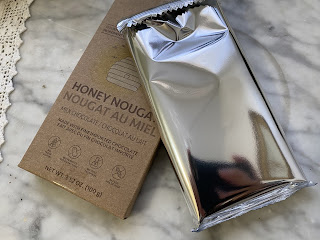 If you also like soft nougat, you have to take a brief moment of grief that there is none here and then move on. The crunchy nougat bits, while not soft, are not bad, nor are they as hard as toffee. They have some stickiness to their texture, too, and their taste (thanks to egg whites) also is distinct from toffee. 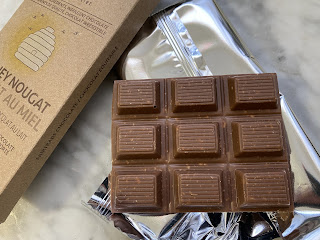 While the bee hive on the front does make me wish for a stronger honey taste, there is honey flavor here. This is still regular milk chocolate sweetened with sugar, so honey is an added flavor rather than the sweetener. And it has the sugar, nougat, and vanilla to compete with. So you could eat a piece casually and not necessarily have honey come to mind. But if you're looking for it, it's very present with its unique, rich flavor. 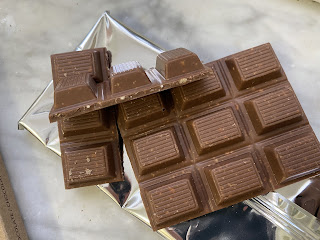 The milk chocolate seems to be the same as what was in the other bar. It has plenty of milk and sugar to satisfy the sweet tooth. Yet it is cooler and less buttery than candy bar milk chocolate--and certainly much nicer. It's nice enough that I wouldn't mind a little more cocoa flavor, but I also can't complain about a milk chocolate simply being a milk chocolate.

All in all, this is a pretty straightforward bar of chocolate. It satisfies cravings for confections, but with better ingredients than one often finds in confections.