Here is how it happened. I was in line at Barnes & Noble last month. Usually, especially around one holiday or another, there are chocolates around. Godiva's usually the main one; they seem to be good friends with Barnes & Noble. But what caught my attention was that there were not only several different brands in the chocolate display they had this time but at least a couple of those had fair trade labels on them. Fair trade chocolate at Barnes & Noble? Hey, I had to get some even just to let them know that I approved, right? 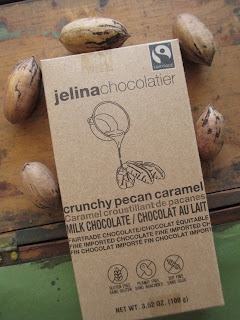 The first one will provide a nice contrast with the Milk Chocolate Honey Almond Nougat from Tony's Chocolonely last week. We have more of the world tricking me here. Jelina Chocolatier offers a Crunchy Pecan Caramel Milk Chocolate. Now even though the picture shows liquid caramel pouring out, at least the name does use the word "crunchy." And we can assume that the liquid caramel is being poured out onto the pecans in order to harden and then become crunchy rather than staying in a liquid state. 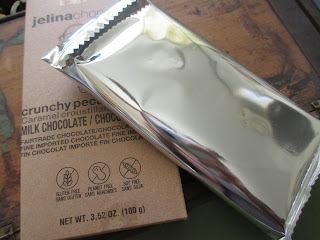 However. The look of the chocolate bar does indeed still imply liquid caramel. Those deep rectangles look like pockets for filling, do they not? Usually that is only the bar's style if it has filling. So I did bite into the first one still expecting liquid caramel. There is no liquid caramel. 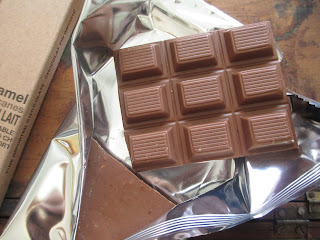 What I did find, though, was more of a nice, light toffee. I specify this because not all "crunchy caramels" are alike. I've had a few of them by this point and this one might just be my favorite. I do like toffee; if I'm in a confection shop, I'll probably choose toffee. And the reason why this one feels so nice and light is that Jelina does make better ingredients a priority. Whenever a company chooses to do this, the difference is evident in the flavor.

As far as the chocolate goes, you can probably tell even in the pictures that it is quite pale. I've had some milk chocolates even lighter than this, but not many. I do quite like the look of the chocolate bar despite its implication of free-flowing caramel, but its color does also imply that this is extremely low cocoa content milk chocolate. I can't find the percentage listed anywhere, but the lightness of the cocoa flavor comes across in taste, as well. That being said, this chocolate does taste nice and milky. It almost reminds me more of a Swiss milk chocolate; they tend to make very light, very milky and yet also quite good milk chocolate. 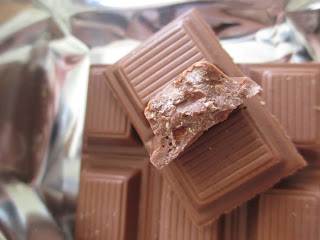 That comparison isn't too far off: Jelina uses chocolate from Belgium in their products. Good thing I chose a milk bar and not a dark because I don't seem to care for Belgian dark chocolate; either they only export the cheap stuff or their style is just too sweet. This chocolate, though, I like. It is very light but it makes for a nice confection-type chocolate bar. I find it much more enjoyable than the milk chocolate from Tony's.

And yes, I've almost forgotten about the pecans because in truth, I did forget about them for the first couple squares that I ate. Sure, there is a nutty taste, but lots of milk chocolate has a nutty taste so I didn't notice anything unusual. There is a crunch to the chocolate, of course, but if there is a separate pecan crunch, it blends in with the toffee-called-caramel. While pecans are wonderful with chocolate and it would have been perhaps nice to get some in here, I also can't say that this chocolate felt lacking without them.

So I'm feeling pretty happy with this bar. Maybe I just like their plain brown card box. Mainly I like that this chocolate feels more like an actual confection: a sweet and milky milk chocolate with light toffee crystals. Whether or not I would try much more from Jelina Chocolatier given that they don't make their own chocolate, I don't know. If a company makes great flavored chocolate, then there's nothing wrong with the fact that they don't also make the chocolate itself. But it tends to feel like I have less to explore. So we'll see.

It also bears noting that Jelina Chocolatier is a Canadian company. Their name in Canada is Galerie au Chocolat; they explain that they chose to use a different name in the U.S. because there was already a similar name out here. So for anyone who happens to be in Canada, there you have it.

Posted by Deanna Skaggs at 1:20 PM