Here I have the second fair trade chocolate bar that I found at Barnes & Noble last month. At just under $4, at first I thought it was kind of inexpensive (especially given that, if anything, chocolate would probably cost more at Barnes & Noble than at another place), but then I noticed that it is only 40 grams. About half the usual size means it's about the usual price for this tier of chocolate. And I'm always up for a smaller chocolate bar. One, it does make the price tag look lower even if the price per ounce is the same. Two, it encourages eating less chocolate--which is something that I think should be part of the whole move toward fair trade cocoa (and yes, I am aware that by reviewing chocolate I am in a sense promoting eating more, not less, chocolate--but I'm also promoting awareness and appreciation, which can in turn help limit). 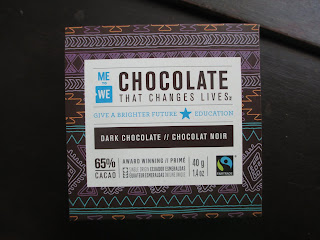 And I can go on all these ethical tangents here because the packaging of this chocolate is extreme on the socially ethical look. All the wording about a brighter future and education on the card box and then the picture of the smiling girl with her book on the inside of the box all contribute to a World Vision type style. And naturally so: Me to We is not specifically a chocolate company. They're the other side of WE Charity; in addition to chocolate, they also sell coffee and jewelry. I didn't think that I recognized the name, but the bracelets definitely look familiar, so I'm sure I've seen them before. 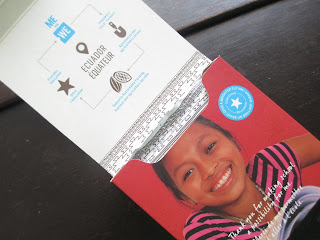 All this is great but it also made me wonder how the chocolate would actually taste. Not to be making a point of pointing fingers, but Equal Exchange, for instance, has good motives and sells different types of products and they do have good tea but their chocolate isn't very good. 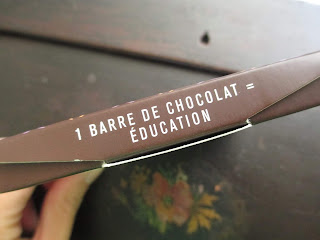 The cocoa is sourced in Ecuador (the package says that it's made in Ecuador, as well, which is nice because often the beans are exported and then processed into chocolate in another country). So the wrapper has a traditional pattern in homage to the chocolate's heritage. The bar itself has a youthful and trendy vibe that reminds me of Girl Scout cookies, like something that you can say is for a cause but is also nice to eat in a casual sort of way (admittedly and unsurprisingly I never buy Girl Scout cookies anymore but that's the idea that Girl Scout cookies evoke). 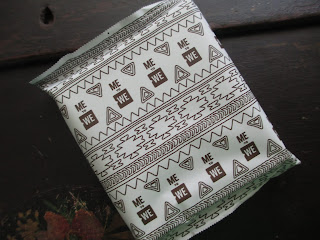 Boy, this chocolate has been through some rough times, though. The stamp seems to say it was made in October 2018 and expires in April 2020. Chocolate has a long shelf life but it is usually less than ideal to get it so close to expiration. What surprises me about this is that I thought that Barnes & Noble just started selling these pretty recently. Usually I think of the approaching expiration dates belonging on chocolate bars that have been sitting untouched on the shelf of a little random shop for years. But this just goes to show how much chocolate sometimes has to travel and how many hands it has to go through before it gets to you. There is lots of bloom on this chocolate's surface; it's definitely been through some temperature changes. That bottom left corner especially has been through some times. Ah, that's life. 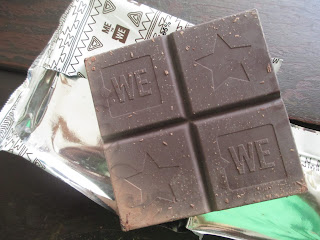 The chocolate immediately on unwrapping releases a sweet dark chocolate smell in that marshmallow flavor note zone that reminds me of a chocolate I used to get at Trader Joe's. Now, while I did like the bar's design, the squares are too big. Maybe it's just me, but these are much too big for one bite and I don't like to bite into dark chocolate; I like to place a piece in my mouth instead. Which means that I had to break one of these apart, which meant that I could tell that it was getting a little hard from being on the old side. Still, the chocolate had a good snap apart from that.

Initially, I thought that the texture had suffered for sure, but then it seemed to normalize. Or maybe I just got distracted by the flavor. It begins with a Ghirardelli-like semisweet chocolate taste, nice and silvery. But it doesn't stay there; it keeps developing. I want to say it gets a stewed fruit or banana taste, something like that. Then it starts mellowing and quieting, finishing gently and leaving a quiet and tender warmth.

Now I did see on their website that Me to We has won awards from the International Chocolate Awards and the Academy of Chocolate; awards like that are nothing to be modest about. But I still wasn't expecting this. I was expecting this chocolate to be mediocre; I truly was. I also wasn't expecting to care for it given that it's at 65% cocoa content. But this chocolate is good. I can see why the company holds its own at awards.

What this chocolate shows me is that they know how to use good cocoa and play to its strengths. This chocolate is neither at all bitter nor that weird middle range "sweet dark." It has some sweetness, but not too much. Instead, the slightly lower cocoa content keeps everything light so that the chocolate won't be intimidating. It's just a nice pleasant chocolate with mild flavor notes. If I were to do my nature metaphors, this chocolate would the moment when you're sitting and staring at a pond in a park. Absolutely wonderful when you're there and so many things to look at when you take the time for it. Less in-your-face, fireworks jumping into the sky but no less detailed. I would definitely recommend picking up some Me to We chocolate if you come across it.
Posted by Deanna Skaggs at 8:59 AM

Labels: 65% Dark Chocolate, chocolate, Me to We, review