La Boheme & What Is Real 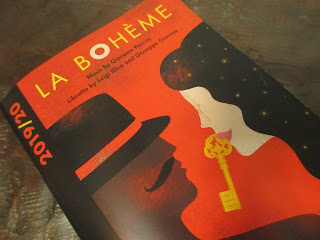 In fact, this feeling of the great joy/pain and success/failure of life is so strong that it almost feels like a sort of precursor to postmodernism. It's a witty story. The opening scene is funny as the characters, desperately cold, burn the pages of Rodolfo's play to keep warm. But by the third act, when Mimi is singing about how she and Rodolfo can agree to stay together until spring because they won't be able to feel the loss so much during spring, well, that's the breaking point. Even though she's singing about pretty springtime things, her song is heartbreak in music form.

And that's life. Heartbreak can come in many forms. There is the loss of a relationship--but also any type of emotional loss. That's one of the guarantees in life: there will be heartbreak. These characters also experience fleeting pleasures and even fleeting sorrows--but they are most stirred by the deep happinesses and the deep losses. In a way, as artists they pursue the deep experiences. They make beauty out of them in their art. But they are also shattered and broken by them. In Mimi and Rodolfo's story, happiness and pain meet, which is expressive of life itself.

First they wanted to believe that they were in love because the idea of being in love seemed so wonderful. Then they wanted to believe that they could separate in order to avoid the pain of a hopeless situation. At the bitter end, they feel the love they have for each other and also the pain of their loss of each other, now made eternal. All through this the question in mind is, what is real in our minds? There is the conflict between what this group of artists are trying to do with their lives and what they are actually experiencing--and a conflict between what Rodolfo and Mimi want and what they actually experience. The curtain closes on her death because what happens next depends on what the characters decide is real. Is the heartbreak real enough to make Rodolfo never love again? Is it real enough that he will pursue an entirely different life, one where he finds a different career and a simpler love that is simply marriage rather than what he had with Mimi? Is it real enough to inspire him to write an amazing play, one that might even give him financial success? Or is it real enough that he will simply continue to live the life that he is now, because it is this life of poverty and fear and poetry that brought him all that he has experienced?

(This is what happens when you write about Puccini while listening to Breaking Benjamin.)
Posted by Deanna Skaggs at 8:54 PM