I've seen Carolina's Chocolate around every so often. The Arizona-based company features the theme of heritage: memory of relatives and cultural flavors. When it comes down to it, though, I'd avoided taking a closer look because Carolina's just blends the chocolate with the flavors rather than making the chocolate. Still, it's fair trade chocolate and there is nothing wrong with not making the chocolate yourself. Chocolate making is an intense process--and skillfully blending flavors into chocolate is a different process.

I went for the Spicy Sonoran as the most classic-sounding bar from the line. The 64% chocolate contains cinnamon and cayenne. I also opted for this bar because of the cinnamon. I've said before that I'm not usually a fan of spicy chocolate--but I do enjoy cinnamon chocolate and sometimes the cinnamon can guide the spice in such a way that even I am okay with it. 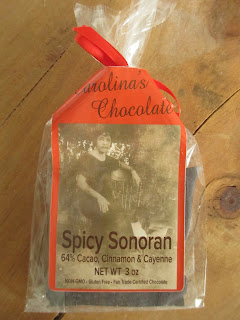 This chocolate wholly expresses heritage. A picture of Carolina, the grandmother who inspired the flavors of Carolina's Chocolate, is front and center on the bag, which is tied off with a ribbon to give it that handmade look. You can almost imagine that she herself made it and put it in a little bag and handed it straight to you. The chocolate looks different from average. There are four pieces inside of varying thickness. One is about the usual thickness, but the other three are about half the usual. The effect is that, instead of a formal process that uses chocolate bar molds, this chocolate is just spread out to solidify and then cut up into pieces. Like you'd make fudge at home. And yes, the chocolate does have some bloom on it. I don't even know if I did that or if it already had it. It's Arizona; my chocolate nearly always gets bloom; it's just the way of things if you're not more careful than careful. 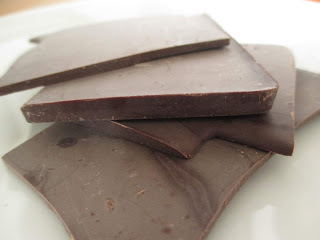 I tasted that sweet chile flavor almost before the chocolate hit my tongue. Then the cayenne built up along with the cinnamon. So the flavor is nice, but it does become a bit strong. I'd thought that the word "spicy" just meant that it had chile in it, not that it was in fact spicy. So this is definitely spicier than I had expected and a tad stronger than most chile chocolates tend to be. Not mild, for sure. Medium leaning towards hot maybe? So whether or not it's the right spice level for you will just depend on you. It's too spicy for me.

The chocolate is fine, better than what I had expected. I thought that it would be that weird, middle range, too sweet chocolate that tends to taste especially bad with spiciness, but that isn't the case. It is a sweeter dark chocolate, but it's at 64%, not 54%; that makes a difference. And you do want this to be a somewhat sweeter chocolate because of the cinnamon.

I took a smaller piece for my second try. Here I tasted the sugar along with the cinnamon--you know, kind of reminiscent of Abuelita hot chocolate. I also got less cayenne because I was getting a smaller piece. On a different day, I took such a tiny piece, barely bigger than a sunflower seed, and that was my favorite way to have it. That meant that the heat was contained enough for me that I could focus more on the flavors. The chocolate is still too much on the sweet side for dark chocolate for me. But that's almost as much of a personal preference as spice level is.

There are four other Carolina's chocolate bars that include other chiles or blends and one that just has salt. So I suppose if you're also hesitant about the spiciness, you could go for the salted one. But even as I declare that this chocolate wasn't made for me, it's the spicy chocolate that is what Carolina's is all about. And I can greatly appreciate that even as I think about who I can give the rest of this chocolate to since I can't really finish it on my own. Heritage flavors, yes, tradition, yes, family, yes, memory of good things, yes, and the sharing of those things, yes.
Posted by Deanna Skaggs at 9:55 AM