The River Runs On

Water brings life and death as it flows along, and the seemingly ever-present river is always changing. (As Pocahontas put it, "you never step in the same river twice.") The river, in a sense, is change. And a drop of water will travel from one river to another and to another and down from one region into the next. Ever flowing, ever growing.

The Salt River has long been a favorite Phoenix pastime, especially among the young. Yet I had avoided it as a college party zone. And also of course you can add to that any concerns about the unpredictability of said changing rivers of water and their rapids. Earlier this month, however, I found myself floating down that very same river which I had always avoided. I happened to be there on my thirtieth birthday, and it happened to be a good way to usher in the new decade. 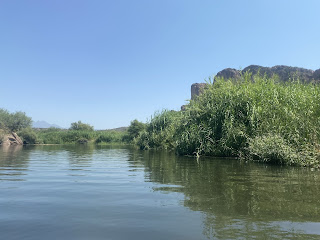 We visited mid week and after the tubing company had mostly finished its run for the season. So there were very few other people, neither any beer cans nor marshmallows. Instead there were ducks and a plethora of butterflies. The late summer rains brought an abundance of caterpillars that by this point had made their transformation into winged creatures that flew around us. One landed on my shorts and tried to suck nectar from the printed flower on the fabric. Sorry to disappoint you, little butterfly.

Despite it being a warm day, being on the water (and not even being in it) did keep us cool. It's quite a treat to be able to spend time outdoors in the sun during summer without melting. The rapids we floated over didn't cause any trouble except for when they brushed us over to the trees hanging over the edge, but even then there were no mishaps. There is certainly great wildness in rushing over rapids over which one has no control; it's a little different from the controlled environment of Disney's Grizzly River Run, where you have no fear of anything going wrong.

Because of time constraints, we made the short distance between Points 1 and 2 before exiting. It was also nice to start small. The time passed quickly. While it is possible that the fear of the ever-changing, never again the same river will keep me from going again, yet it was such a pleasant float down the water that it would be nice to begin participating in this favorite pastime regularly.

Do you fear change, do you fear the unknown? Maybe this is why I have a sometime fear concerning watery situations. The doers infected with wanderlust dive into the water. Whereas I stare into its foggy depths overwhelmed by the possibilities.