Earlier this month, I described my visit to Eldora Chocolate in Albuquerque. I was impressed with the impression I got of the small batch, bean to bar, organic, and fair trade company. So I walked away with a truffle, four chocolate bars, two soaps, a lip balm, and a body butter. And did I forget to mention anything else? It's difficult when you're right there to not walk away with the whole store, but at least I got a few things. The one I was most eager to try was the 70% Dark Chocolate Goat Milk bar, so we'll begin there. 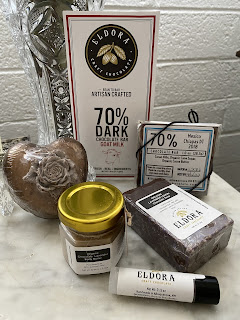 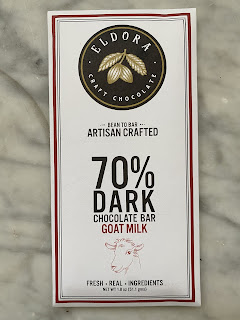 The outer design of the packaging is in perfect balance. No clutter, and the white provides both a sleek base as well as a rustic, handcrafted charm. Depending on where it is displayed, either of the two angles might become more emphasized. So it hits the gourmet market but also settles into that New Mexico chic. And the goat drawing is cute with its subtle smile without being cartoony or otherwise overwhelming the look. 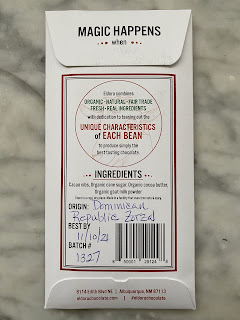 Inside, the bar is sealed in clear wrap, which isn't my favorite option as it isn't the easiest the rewrap. But at least the envelope-style of the card box makes it easy to pack up anything you're saving for later. The squares come with the simple diamond design; its surface is dark with warm undertones. Smelling the chocolate, I do find a rich chocolate aroma along with a little something else. I probably wouldn't be able to put my finger on it otherwise, but knowing that there is goat milk that does seem to be the base of that extra aroma. 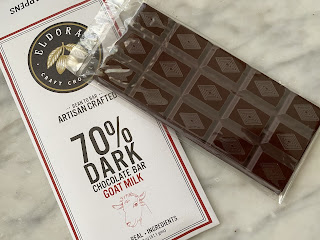 There's a good snap to the chocolate, and then right away on the tongue I get that slight goaty taste that is familiar from goat milk and goat cheese. I broke up the bite just a bit to get the flavors going and found that there was indeed a definite goat milk taste along with the chocolate. It overpowers the flavors in the sense that lavender chocolates tastes primarily like lavender or orange chocolate like orange. The focal point here is the goat milk flavor--which can be an acquired taste. There's quite an animal quality to goat dairy, though being dairy it does also add a touch of creaminess. The finish perhaps is the creamiest. Overall, though, it remains still more like dark chocolate than milk chocolate in structure. So this isn't necessarily a replacement for the effect of milk chocolate--though it is just creamy enough that it could be an alternative if someone really needed it to be. 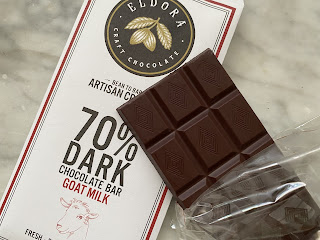 Replacement possibilities aside, it's just nice on its own. Though I can't taste too much of its nuances, the chocolate is good; it's warm and rich. (This is Eldora's Domincan Republic Zorzal cocoa, by the way.) In fact, this is quite a puzzle for my senses because there is that almost creamy element from the goat milk, and yet the chocolate seems otherwise to almost be darker than 70%. It isn't sweet; you only get tricked perhaps into thinking of sweetness because of the goat milk. But think about it this way. Usually in a 70%, the rest of the percentage is made up with in sugar. Here it's made up with both sugar and powdered goat milk. So there is in fact less sugar here than you would normally find in a 70%. That must have been a tricky ratio to figure out, to get the right balance.

So it's good. It's different and yet simple. It's a nice luxury treat yourself bar but also a fun one to share just because it's different. A real foodie item in addition to a chocolate one, and though I love to bring up the idea of adding chocolate to appetizer or dessert boards, this bar begs to be on a cheese and fruit board. And given how well they balanced out the goat milk flavor, I'm a little disappointed that this was the only flavored chocolate bar I got from Eldora. There's always next time, eh?

Posted by Deanna Skaggs at 5:45 PM