Sometimes I don't even know if I have anymore interest in fudge these days. Fudge, being like candy and a brownie put together, is a rather nice sweet. The problem is just that, because of my chocolate reviewing, I've been coming into contact with so much chocolate over the last decade (much of it very good chocolate) that I have less interest in mediocre chocolate. This is why, when it comes to desserts at restaurants, I'm more likely to get excited over a wine cake than a flourless chocolate cake: I get enough chocolate already. And when sometimes I'm with other people and we pass by a shop with fudge, fudge sounds great but I sometimes end up not wanting to eat much of it after all. 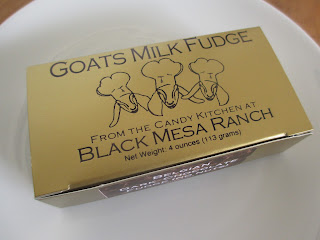 But Black Mesa Ranch's table at the Chiles and Chocolate Festival at the Desert Botanical Garden caught my interest for three reasons. One, it's a product made in Arizona (Snowflake isn't quite local for me, but still) and not just for a big chain. Two, it's made with goat's milk. Three, this fudge has much simpler ingredients than, um, many other fudge products. That means cane sugar, butter, goat's milk, Belgian cocoa, vanilla, and salt. I don't care about the fact that it's Belgian chocolate. Usually the Belgian chocolate that makes it to the U.S. (I've never been to Belgium myself) is just mass-produced chocolate of not particularly high quality. And quality aside, I would like to see local chocolate used in this fudge because that would really go well with the local goat's milk (now that we have chocolate made in AZ, which, depending on when they started, may not have been the case when Black Mesa started making fudge). That, however, is my one complaint. (Black Mesa Ranch, by the way, also sells award-winning goat cheese and other dessert products like cajeta, fudge sauce, and chocolate candies/confections.) 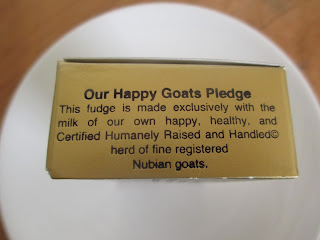 Otherwise, I'm very happy with this fudge and just wanted to give it a quick nod. As you can tell by now, I chose the Belgian Dark Chocolate fudge. They did have fudge with chiles (which I suppose I should have at least tried a sample of), but given what I said last week about my hesitancy with chile chocolates, I decided to just stick with the basic fudge. It comes in a simple gold box that has more of a design to it than is generally the case for fudge. So that's nice. 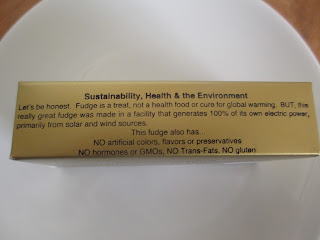 I did wonder if this fudge would have that "goaty" taste that goat milk and goat cheese (and that one goat cheese truffle that I got in Santa Fe) have. It does not, so if that's a concern for you, don't be concerned. What it does taste like is chocolate and cream. I feel like this is a lighter and creamier fudge than the standard fudge, which tends to be more dense and heavy. Though it's labeled as "dark," I wouldn't say that it's very dark. It seems more of a standard chocolate level to me. 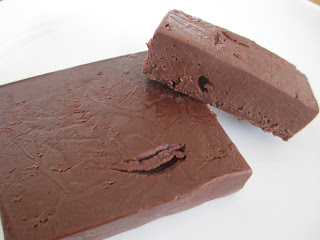 This being fudge and fudge simply being fudge, there isn't much more to say--just that this fudge does taste better than other fudge. Whether that is due more to a limited ingredients list or better quality ingredients or even to the use of goat's milk, I can't say for certain. But I can recommend this fudge; simply the fact that I found it worth giving a review means that I am pleased. If I were to walk by this fudge, I don't think I would hesitate to agree that yes, we should get some to share. Fudge is all fudge? Yes--and no. They are not all alike.
Posted by Deanna Skaggs at 4:47 PM