The "Unmentionable" Side of Victorian Living

Usually it isn't useful to directly compare two very different pieces of fiction. Such a comparison, however, can sometimes be helpful for non-fiction. After having recently read Ruth Goodman's How to Be a Victorian, I was curious to see how Therese Oneill's Unmentionable: The Victorian Lady's Guide to Sex, Marriage, and Manners would compare. Obviously Goodman's book covered more ground, but I was interested to see how the two writers approached the same topics. 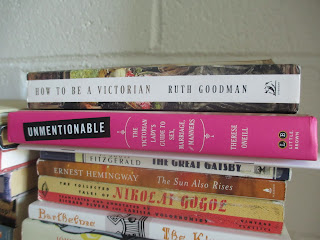 Now, both the title and physical copy (with its cover photo and bright pink spine) of Oneill's book let readers know right away what style and tone she's going for: sensational. If, then, either the title or look of the book turn you off, you easily know that this isn't the book for you. She chooses to focus not on providing an overview of Victorian living but on the scattered, scandalous details that might make for entertaining or shocking reading. She tries to shock her readers.

Primarily, then, this book goes in the humor category more than the history category. In the beginning of the book, Oneill herself admits that she's going to jump around from topic to topic instead of following a straight path (like Goodman, for instance, did). And boy does she jump around. She says that she'll be focusing on the upper class but then she keeps on bringing up situations that would not apply to upper class women at all--but only readers who already know this will always pick up on this fact. That became a bit annoying: she focused on the social side of the upper class while also acting like those women needed to do all of the hard work that women of lower classes did (when in reality they didn't and the lower class women didn't have the same social standards to have to adhere to). Not that this book directly gives false information; it just sometimes implies false images. This, of course, leads up to the final chapter, in which Oneill admits that she has been exaggerating. ??? Then what's the point? Disrespecting dead women so we can all have a good laugh at them?

That's just how humor is, though. Either it's your style or it isn't. As you can tell, this book wasn't really my style (as I knew going in that it probably wouldn't be). But I did want to hear what she had to say.

The thing is, this book makes for easy reading. While Goodman's book was slow reading because it was so dense and so full of information, this book is 400 pages of not-densely-packed-words with plenty of headings and pictures that take up space on the pages. And because of Oneill's humorous style, the pacing moves quickly. She mixes facts in with her commentary so that this book is a quick read. And it does have some good factual information mixed in. Of course, with a book like this, whether or not it's all new to you or it's mostly things you've heard before is just going to depend on your own previous reading experiences. I don't think I came across much that I hadn't heard before, except in certain of the details (she does go into further detail than some places do). When giving sources, she tends to favor showing quotes from people of the time because those sound more shocking to modern ears than simply explaining how something was done. So while you'll certainly learn something from reading this book, there are other books out there that will give you the same types of information without the humorous-at-the-expense-of-the-Victorians style, if that's what you'd prefer.

Mostly I objected to the concept of trying to put down an era and also say that our is so much better. She's the first person I've heard say that corsets (not tightened or barely tightened, of course) were less comfortable than modern bras (I've never heard anyone else say that modern bras are comfortable). And in the end she praises modern ibuprofen, tampons, and shampoo--okay, maybe we don't put arsenic in face cream anymore but we put plenty of other harmful ingredients in things like tampons and shampoo and makeup (and food) and even ibuprofen isn't exactly the type of thing you want to be using regularly. We fill the ocean with plastic straws and bags and sprinkle wood pulp on our pasta and use cookware and dinnerware with lead in it (think twice about those great dollar store prices) and put parabens and Red 40 on our lips and drink high fructose corn syrup (and Red 40, too) and eat chocolate and wear clothing resulting from slave-like conditions (if not actually slavery). And plenty of us don't even have the excuse of ignorance. Why are we or our lives so much better than the Victorians? (Obviously there are plenty of ways in which we have things "better," but my point is that every era has its positives and negatives.)

And the thing is, why does the mere fact that you're talking about chamber pots, periods, and attitudes towards sex need to be scandalous? Ruth Goodman covered the same topics in her book and maintained the same matter-of-fact style throughout. She calmly described, for instance, her experience trying out the delicate process of making condoms out of animal intestines; Oneill, on the other hand, expects you to be shocked just because she's talking about subjects that novels don't cover (I for one don't think that fiction needs to show characters in the restroom or taking care of periods, unless perhaps the plot has to do with health and so this is a detail the story needs to show). What's shocking about being alive, or about realizing that people in the past were alive, too?

Sigh. I've ranted too long, haven't I? I guess you can always read this book as a conversation starter. It's the type of book that you can neither recommend nor not recommend (unless you already know someone's tastes): you just have to decide for yourself if it sounds like your style.
Posted by Deanna Skaggs at 11:33 AM

Labels: How to Be a Victorian, Ruth Goodman, Therese Oneill, Unmentionable