The full title of this book is Star Wars from a Certain Point of View; it contains "40 stories celebrating 40 years of Star Wars." That being said, even though the 460 pages don't have very high word counts, this is a hefty book to get through. Forty individual stories by forty writers with forty different perspectives and almost as many different settings meant that at times I felt like I should be taking forty whole days to read this book. Though a few stories are either longer or shorter, most of them come in at around ten pages--which is quick to read, but that quickness also means that as soon as you start in with one story, you're on your way into the next, where you have to readjust to the new tone and narrator. This being that type of book and also being a special celebratory book release, you may want to allow extra time to let this one sink in instead of trying to rush through it. 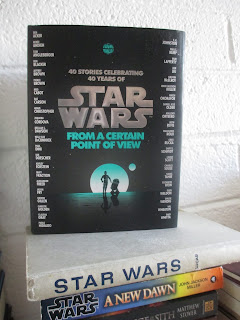 When this book was first announced, I was a bit confused about the content. At first I thought it was going to be non-fiction. What it is is quite literally Star Wars (what those of us who weren't alive in the 70's know as Episode IV or A New Hope) from 40 different points of view--chronologically. So we start with Captain Antilles on the Tantine IV while the ship receives the Death Star plans, then move on to a stormtrooper who boards the ship, and then to an Imperial logistics liaison. We're seeing the same scenes that are in the film or we're hearing about the events in those scenes, but we're getting to hear about it from the perspective or side characters or other people who would have been involved even if they never appeared onscreen. The concept makes for a great way of celebrating Star Wars and revisiting familiar things in new ways.

The stories are quite varied. They all feature very different narrators. Some we know already by name (like Lando). Some we know by face (like the stormtrooper who told let Obi-Wan and Luke "move along"). Some we know from other Star Wars stories (like Aphra). Some are random. We usually get to hear backstories for the characters, which can be intriguing and very Once Upon a Time style. Some of the stories have more action, some have more drama, some have more philosophy. Some are better than others. And naturally different readers are going to have different favorites depending on what types of things we all respond to most.

I was so excited that Beru has her own story--but I have to admit that it slightly disappointed me. I had made up my own idea of Beru and this story didn't completely match mine. Beru was the soft and kind young woman (well, and later older woman) to whom hard work was like breathing, the woman (in my mind) who gave up having her own children to raise this little child who came into her arms. So I guess sometimes it's almost better to fill in the blanks on your own.

With that said, we did, however, cover plenty of fascinating ground. While I didn't love the tone in which Obi-Wan's story was written, I did enjoy the thoughts and scenes that we got to see there. And Yoda's story was great, particularly because we learned that he had hoped to train Leia and not Luke (it almost feels like a slight teasing for events in the sequel trilogy, where we now see Luke as troubled and possibly having failed and Leia as the strong, active leader).

Because these are just short stories, this book would be perfect for someone who doesn't usually read Star Wars book. You can read a little at a time or get more of an overview look versus having to focus on just one longer story. And of course it's a must-read for anyone who does normally the novels: it truly is a celebration of the types of things that we love.
Posted by Deanna Skaggs at 11:42 AM