Luke as a Legend

You know that story, right? When Lucasfilm was getting ready to make Episode VII, they all sat in a room and asked the question, Who is Luke Skywalker? That of course ended up leading to a film where we didn't see Luke until the very end, where he had "vanished" and various character were trying to find him again, and where we weren't entirely sure who Luke was anymore because he had obviously been through many things (some of which we know and some of which we don't know) since last we saw him. Luke, in our minds, is the legend of who he was--we don't know exactly who he is anymore.

And naturally, of course, Luke is also the audience/viewer. He is the one who sets out on the adventure and goes on the hero's journey. He is the one who is characterized more by what he does than who he is because his character is intentionally kept simple so that we can all picture being in his place. 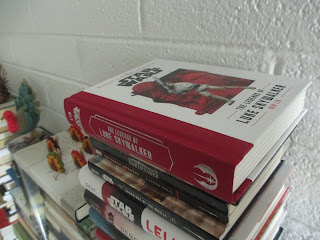 Ken Liu's The Legends of Luke Skywalker launches from these two concepts. The book has a loose frame story with six legends that characters in this frame story tell one another. They're all stories about Luke. Sometimes we know that they're about him and other times we're not positive if they really are or not (it all goes with the concept of "who is Luke?). The first story, "The Myth Buster," is an over-the-top example of telephone: you know, when a story changes each time someone tells it so that everything is completely different by the time you get to it. I didn't exactly enjoy this story and I worried that they would all be like it, but then I realized that the book starts with this "untrue" story to establish the concept of legends. Legends aren't facts and they're not supposed to be; they're the truths of how people see the world around them. Legends are vehicles for our viewpoints.

The other five stories are good reads. They establish aspects of Luke's character or set up classic Star Wars themes."Fishing in the Deluge" and "Big Inside" hint at Luke's (post-Episode VI and pre-Episode VII) quest to learn more about the Force and the Jedi (this book is, after all, another part of the "Journey to Star Wars: The Last Jedi" series). And of course the frame story heavily references Canto Bight, which we've all been hearing about as one of the new locations in the film.

This book was made for young readers (I think the store shelved it with 9-12), so it's a quick read. Because it's quick and cool, I really recommend this one. Maybe I'm just partial to all the stories about walking across landscapes, but I thought this book was a lot of fun. It's kind of a shame that it was hiding out there in the children's section (where only people who already know that it's there will go to look for it) instead of out with the rest of the Star Wars things. They also made quite a nice hardcover out of it. The style doesn't completely match the usual, established looks: there is no dust jacket and the spine is red cloth. That makes me wonder if they're planning a companion book to this one (another "legends" book about a different character) or if they just wanted this one to stand out from the others.

Who is Luke Skywalker? He was the hero of the story for the audience of the story to relate to--but now the story doesn't belong to him anymore, so who has he become? He apparently didn't make a smooth transition from hero to mentor--or did he? Was he at fault as a mentor or did his pupil just make his own choice regardless of his teacher's good advice? The question is, on what did Luke base his actions? First he wanted adventure, then to help his friends and then the galaxy and then simply his father. So he is a helper. Now. Can he help Kylo? Can he help Rey? Can he convince them, like he convinced Vader, to choose the best of themselves at whatever cost?
Posted by Deanna Skaggs at 2:30 PM