Time to jump right in with the first of my findings at the Chiles & Chocolate Festival at the Desert Botanical Garden (which is still going all weekend long--click here to read my post on the festival itself). Going in, I wasn't sure if the chiles and the chocolate would appear as separate ingredients or as combined elements. Turns out that while there was some mole and some of the vendors did have chile chocolates, most of the chocolate companies were just selling their regular products. Not that I mind: I shouldn't say this too loud perhaps, but I'm not generally a big fan of chile chocolates. I decided a little while ago that I don't like spicy food (mild to medium spice is fine, but I don't like my food to burn me), despite living in the Southwest (anyway, though, Southwestern food isn't all spicy). So the same goes for chocolate, especially given that strong spice can drown out all other flavors.

I did, however, pick up the two chile truffles that Zak's Chocolate had on offer, to get into the spirit of the festival and to see how they handled this flavor combination. 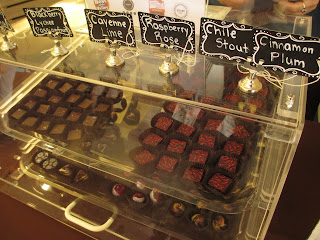 Cayenne Lime - This truffle is a simple square design with some salt on top. I may not love spice, but I do love salt and lime. Right away I tasted a sense of heat along with a taste of lime and a taste of chocolate and also some salt. The effect is quite lovely, a word I wouldn't have expected to use for a truffle with such striking flavors inside. The thing is, though, the cayenne is just a sense of warmth; it isn't really spicy. Obviously, everyone's spice tolerances are different, so what I describe as not being spicy another person might in fact find spicy. Still, I would categorize this spice level as very mild. After what I just mentioned, I'm counting this trait as a good thing. The cayenne doesn't overtake the truffle; instead, all of the flavors work together in a careful balance. The cayenne is the warmth and the lime is the zing and the chocolate is the creamy, cool, gentle element. Cayenne lingers in the aftertaste. I can get behind chile chocolate like this. 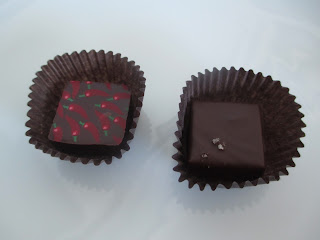 Chile Stout - Another square, this truffle comes with a bright chile design on top, which is very festive for Chiles & Chocolate. The stout is Arizona Wilderness Brewing Company's American Presidential Stout and the chiles are from Rhiba Farms. The flavors here are quite different from those in the Cayenne Lime. Rich chocolate comes in first, then a strong hit of the stout, then a sense of warmth from the chile, and then a rich fudge flavor to finish; once again, the aftertaste has chile warmth, this time with a tad of the stout, as well. The chile is by far (except perhaps for that first hit of stout) stronger than the stout; in fact, if you eat this truffle quickly, the stout will come in almost at the very end before quickly fading in favor of the chile. Not being a stout drinker (I think the only stout I've had was a chocolate stout that I bought for obvious reasons and then poured out without reviewing because I thought it was disgusting--sorry, stout lovers), I can't quite comment on how well this stout comes across and blends with the other flavors. The chile I will describe as being somewhat spicier than the cayenne was, though I still wouldn't necessarily call it spicy. Because it is stronger, however, if you're looking for more of just a chile chocolate, you might perhaps prefer the Chile Stout to the Cayenne Lime. 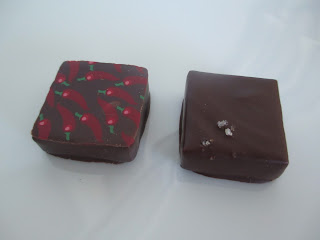 Myself, though? I prefer the Cayenne Lime for the simple reason that I like lime more than I like stout. The two truffles are nice to try together, whichever one you end up preferring. One is lighter, tangier, and creamier; the other is warmer, deeper, and richer.
Posted by Deanna Skaggs at 12:53 PM