Wei of Chocolate was one of the local companies at the Chiles & Chocolate Festival at the Desert Botanical Garden last weekend. It's been so long since I had more to choose from in their products than just the little bowl of individual chocolates at Nectar Apothecary in Prescott that I didn't know how to go about choosing (the 30-piece assortment was too big for my purposes). I did get a sample of the lavender chocolate, which was lovely and felt very classic Wei. But I ended up buying the Chai Spice Dark Chocolate because I was curious how their approach would be to this flavor. 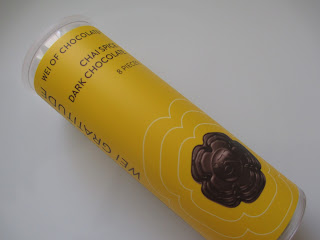 Everyone makes chai tea in different ways, depending on what combination of ingredients they use and which flavors they emphasize most. Wei of Chocolate has that hippie vibe and style that is generally most focused on awareness of the moment--which is why the lavender chocolate felt so classic for them. I wondered how they would handle the stronger, highly flavored characteristics of chai. I hadn't ever had something from them with such a strong flavor addition, yet the more natural values of the company probably would mean that the individual flavors in the chai would be fresh and of good quality.

As usual for Wei of Chocolate (unless you're just buying pieces individually), the eight chocolates come in a clear cylinder. These cylinders have always baffled me: probably they have a specific reason for using this type of packaging, but I would expect a company like this to use maybe a paper bag or a mini box instead. Again per usual, the chocolates come wrapped in foil, this time in golden yellow to match the cylinder's yellow label; each flavor has a color and golden yellow is the color of the Chai Spice, also known as Wei Gratitude. This is the flavor that's supposed to help you take a break to enjoy the moment. 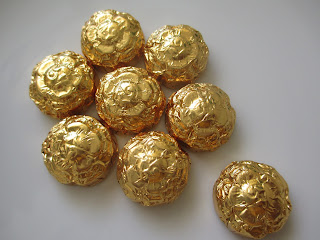 As soon as I unwrapped the foil to reveal the little chocolate flowers (which are roughly the size of a quarter, though of course much thicker), I caught that warm spiced smell of chai, or cinnamon and cardamom. Now, the label says to let these melt in your mouth without chewing (they are, after all, the perfect bite size), but I don't find that that approach works well for the Chai. For other flavors, maybe (for the lavender, sure), but not for the chai--at least not for me. When I tried that, I just got the peppery, spicy side of all the flavors, like strong ginger (even though there isn't actually any ginger in here). 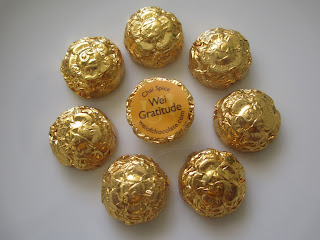 I find it much nicer, with this particular flavor, to bite off just half of one of the flowers and then slightly chew the chocolate before letting it finish melting. This way, you give the chocolate a head start and let it work in its flavors at the same time as the chai spices. When you drink chai, the milk element keeps everything aligned with creaminess and a sense of sweetness; in this case, the chocolate is in place of the milk, so it serves that same type of purpose in grounding all of the strong spices. The effect, still, is more on the spicer rather than sweeter side of chai (chai always does sit closer to one end or the other--I admit that I usually prefer the sweeter chai rather than the spicier chai). Particularly strong is the cardamom. 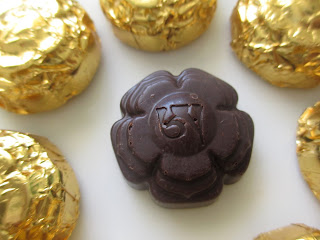 In addition to the usual ingredients like cardamom, cinnamon, and cloves, Wei of Chocolate has also added in their own flower blend to help give that calming effect. I can't say that any of that comes across in the flavor that I noticed, but a warm chocolate like this does indeed bring up that cozy fall/winter feeling.

Probably just because I tend to like sweet chai, I would like to see a milk chocolate version of this, as well. I don't picture, however, that Wei of Chocolate would make a milk chocolate, even if they used a milk alternative (like more and more companies now are starting to do). And it isn't that such a product is necessary; this chocolate, though dark, is only at 68% cocoa content, so it's still light and sweet enough to keep the chai spices warm (as opposed to being so dark as to weigh everything down). Just the thing to have now that we're moving deeper into November and then on into December.
Posted by Deanna Skaggs at 5:29 PM