Beren & Luthien: The Heart of Tolkien

I am rather late to the party here. While I was extraordinarily excited to learn that a Beren and Luthien book was coming out this (past) summer, here I am not even getting to the book until fall. That, however, is the wonderful thing about fiction: it exists outside of time and the story is always there, replaying itself, ready for whenever you're ready. 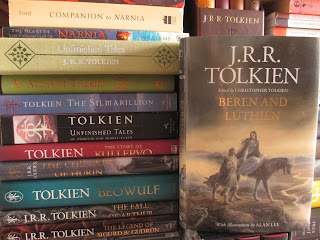 As Christopher Tolkien writes, there is no new material in this book and most of it is previously published in things like The Silmarillion and The Book of Lost Tales. What the book is is a look at how Tolkien's handling of this story developed over time and in the various forms. So you get to see how he first wrote it and then later changed it and how he wrote it in verse and so forth. For Tolkien enthusiasts and also people interested in writing, the way that Christopher Tolkien has arranged this book is fascinating. I don't know, however, that this book, being more of a study than just a story, would be a good first introduction to the story for someone who hasn't read The Silmarillion yet. So bear that in mind.

The early version of the story is intriguing: it reads more like a fairy tale than like very specific "Tolkien fantasy" that we would all come to know. Beren becomes almost a Cinderella character, working in the kitchens of Melko (later Melkor, Morgoth). And if you've never read of Tevildo Prince of Cats (who later is, of course, completely removed from the story), that character alone makes this version of the story fun to read. The verse version is also quite nice to have. If it has been previously published, I don't know where that might be; it was new to me. Some of it is quite beautiful, displaying Tolkien's ability to describe images laced with nature and faerie. You could in fact, if you already know the tale of Beren and Luthien from other publications and you're not interested in reading about all of the details of the changes in the story, get this book just to read the verse form of the story.

And of course let's not forget about the beautiful illustrations from Alan Lee, whose work by this point feels so Tolkien to most of us that it feels like he is painting real images, not simply "his take" on the visuals of the text. Sadly, Christopher Tolkien writes that because he is now 93, this will probably be the last of the books of his father's writing that he edits. I had grown so used to new publications like this that this is a strange thought. Beren and Luthien, though, as he mentions, is indeed a fitting way to come to a close: these are the names that mark the graves of Tolkien and his wife, bringing fiction and real life to a meeting place.
Posted by Deanna Skaggs at 12:59 PM