For more of a classic opera, this month Arizona Opera turned to Puccini's Tosca, directed by Tara Faircloth. Given how much I enjoyed Madama Butterfly last season, more Puccini sounded very welcome. 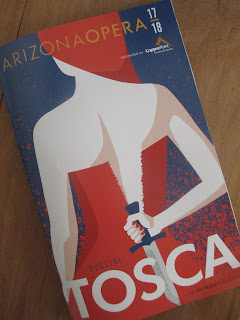 Indeed it was. His music has long and sweeping sounds, where emotions soar up into the notes that the performers sing. And the score, performed by the Phoenix Symphony, had such resonance that it reminded me of early film scores--for some reason, I kept on thinking of Snow White and the Seven Dwarfs. Maybe it's that dramatic quality. This was a very dramatic opera, and it felt like I was simply watching theatre, not specifically "opera." When the characters sang, everything felt a thousand times more natural than the singing in most musicals (most musicals, by nature of their form and genre, have a "false" feeling about them).

That is, the story and the lines are all, as I mentioned, extremely dramatic. Over the edge dramatic, but in a good way. In a way that made everything feel completely immersive. And the way that it is all put together pulls you, the audience, into this heightened level in which you experience art as a fluid and tangible substance.

Hmm. This is why I consider posts on shows and books and movies reactions rather than reviews. I don't feel led to comment on the sets or the costumes or the particular talents of each performer or any of that. To my eye/ear, all of that was wonderful, so I have little to say in terms of regular review content. Instead, I just wanted to share what I came away with. I have nothing to say except that this production was one of the unmissable ones.
Posted by Deanna Skaggs at 1:15 PM