I am very late with this post because of Thanksgiving. So we'll just pretend that I'm not a week late (the performances of this post's subject were the weekend/week before Thanksgiving).

Said subject is The School of Ballet Arizona's production of Tchaikovsky's The Sleeping Beauty. I've been to a couple of Ballet Arizona's professional productions before, but never to one of the school's shows. I wouldn't have even been curious enough were if not for the fact that this season it was Sleeping Beauty. That music makes Disney's film version of the story unique and colorful and positively endearing to me, and I unfortunately couldn't make it to Ballet Arizona's (professional) production of this ballet a year or two ago--so I jumped at the chance to even see "just" the school's version. 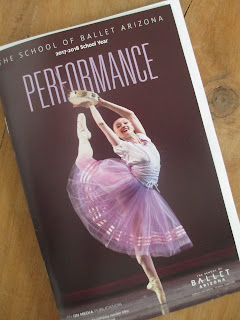 I'm glad I did. For anyone who enjoys the full productions, seeing one by the school at least once is a must. It's a completely different experience. Instead of being at Symphony Hall, it's in a comparatively small space at the School of Ballet AZ itself. A much smaller audience (packed in more closely) and a much smaller stage. And you're right next to the stage, probably closer than if you were sitting in the front row at Symphony Hall. So you can see the dancers' faces and your attention tends to go more towards the technicality of the movements instead of just to the shapes formed by everyone onstage. It's a very different view.

The backdrop, though simpler, was still nice. And the costumes were still elaborate. The dancers were from various different levels, each performing according to their ability. That is, the very young dancers had smaller pieces or little group pieces (where they did all look cute in their costumes). The next levels up were pretty impressive: this is a good school. Even young dancers were so precise. And when some of the younger performers didn't quite hit their marks, I was enjoying watching them, anyway, because I got more of a glimpse into the work that it takes to reach precision. There were also dancers from the Pre-Professional and Professional Programs and the Studio Company; they took the weightier, more challenging roles. So you still get to see excellent dancers as Aurora, Carabosse, etc. What you're seeing is what it took for dancers like these to get to this place.

And Tchaikovsky? Didn't disappoint. Of course, the audio was played over a speaker system instead of being performed live by the Phoenix Symphony (one day I'll get the chance to hear that), but they do put the music nice and loud. In fact, more places should blast Tchaikovsky; that was wonderful. If I were a musician, I would explain why I like his music. I can only say that it's tangible and that it creates images, images connected with emotions.

So yes, this was a ballet worth seeing, and no, the School's productions aren't just for families of the dancers. They're an opportunity to sit up close to the action and get a different view on performance.
Posted by Deanna Skaggs at 4:40 PM