Thanksgiving is at last just around the corner, and so we have another Christmasy chocolate offering today. It is the Frosted Gingerbread in Milk Chocolate from Chocolove. The packaging is highly festive with what appears to be a life-sized gingerbread house under a snowy sky. The effect of the bright-lit windows is cheery and inviting. You'll note that the name is frosted gingerbread, not just gingerbread. So we're not thinking just cookies here; the idea is of a gingerbread house covered in snowy frosting like in the picture. 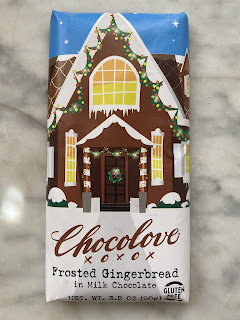 Chocolove always includes these poems on the inside of their wrappers. I can't say the Christina Rossetti poem here necessarily goes with this theme, but I guess it mentions winter at one point so that's how it got in? We also have the usual gold foil and small hearts in the center of the chocolate squares. Breaking into the rows, you'll find little spots of white within. Not the color I'd expected. I had expected to see brown for  gingerbread, but the white is of course the frosting element. The back of the chocolate shows shallow lumps as you would find in an almond chocolate. 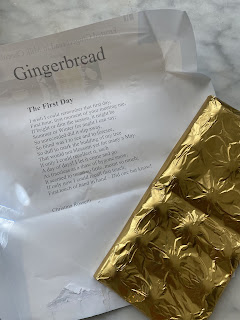 In the past, I've decided not to buy Chocolove's dark chocolate anymore, even if it's an otherwise appealing-sounding seasonal chocolate. Their chocolate isn't the highest quality, and I can't tolerate poor dark chocolate, whereas milk chocolate can be better because it's already a lot of milk and sugar anyway. That being said, this is a sweeter chocolate aroma than what I typically try. So just bear that in mind. If you buy a lot of standard milk chocolate, you probably won't see what the big deal is. But if you're buying more of the artisan chocolates, this one will be on the sweeter and greasier side. 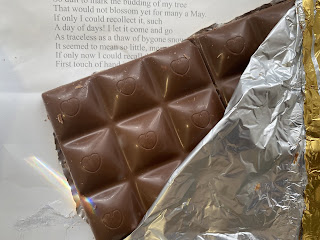 There is perhaps of hint of ginger to the aroma, as well. Ginger was at first the only winter spice flavor that I could really pick out, though when I focus in I can tell that the cinnamon and nutmeg are there, too. The spices remain fairly light throughout.

Once you start biting in, you'll be able to tell that in addition to the white frosting pieces are also light brown gingerbread bits. Worth noting is that this is gluten free gingerbread. There is a marked difference in the texture of the cookie pieces versus the frosting. The frosting's texture is exactly as you would expect from frosting that has been left out in the air, as on a gingerbread house; the closest comparison I can make would be to malt balls, I guess. 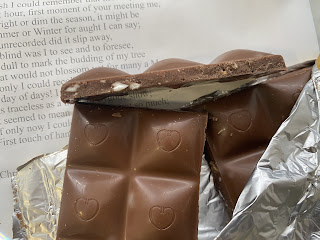 I'm used to the gingerbread cookies that I make having lot of molasses. But the flavors here are more like the house kits that you buy (which really aren't designed for eating, if we're honest about it). The gingerbread here is made with just brown sugar and no molasses. So the focus becomes more on the light ginger flavor.

I like winter spices and could do with them being stronger. But the lightness I'm sure is intentional: this approach will probably suit more palates than a strongly spiced chocolate would. Especially given that, once more, these flavors (and packaging) do have appeal for children as well as adults. Initially I had a lukewarm attitude towards this chocolate, but I do find myself enjoying it more as I nibble away. I wouldn't call it the best or most exciting Christmas chocolate I've come across. But it's a pleasant, sweet, wintry chocolate nonetheless.

Posted by Deanna Skaggs at 8:05 PM