On Saturday I escaped out of my skin. Well, you see, here is how it happened. First I burned the skin of my fingers on a pan (just lightly). Then a cutting board jumped out of the cabinet to slam into the bridge of my nose (my nose didn't break and I didn't get a black eye, so I'm happy, bruise or no). And I was still a little let's jut say loopy after my first acupuncture treatment earlier in the week (I didn't know acupuncture can cause emotional release). The order of these things is all mixed up, but in between the burning of the fingers and the bruising of the nose I went to see the Immersive Van Gogh Exhibit in Old Town Scottsdale. 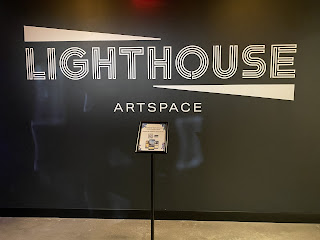 The exhibit is designed by Massimiliano Siccardi with music by Luca Longobardi. Even though Van Gogh is a familiar artist, the exhibit is an entirely new way of viewing his work. I can't say that I have a lot of experience with digital art exhibits, but it's certainly something that will continue to grow more common. To say that the exhibit involves digital projections of Van Gogh's paintings onto the walls of a room doesn't quite convey what viewing it in person is like. While projections have come a long way in quality in the past couple decades, projections alone aren't enough to provide either freshness or amazement.

Yet as I sat in this exhibit, I found myself mesmerized.

I don't know if the setup was slightly different here than it was in Paris or Toronto or if it will be in other locations. Here, you walked through a little corridor and entered a square-ish room where you could stay and watch, or you could continue walking into a rectangular room. Both had the same projections but were fairly different in experience. We were in the square room and only spent a brief time in the rectangular room on the way out just to get a sense of how it was different. The glossy floor of the square room not only picked up the projections better but also had more of them, and the smaller space meant that it was easier to feel like you were literally immersed in the paintings. I think also the room was darker, which also made the colors more crisp. 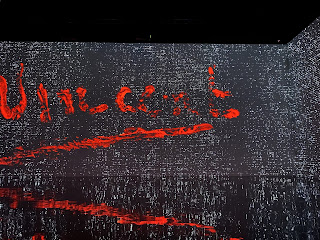 There is a video loop to the projections. So you might walk in towards the beginning or end or anywhere in between. You can stay for one run through or keep watching. Instead of just seeing the paintings projected onto the walls, you see the paintings made alive. They're not quite animated; that isn't the right way to describe it. If there is movement within the paintings, it is the windmill arms that will turn or the candle flames that will flicker--the people do not move. That is, the paintings of the people might. Faces might drop slowly into the "screen" or fade into view. Colors might change--from dark dawn to rosy morning hues.

Or one of the most intriguing things that is also so specifically great for Van Gogh is that the very brush strokes might move. Van Gogh uses those fat brush strokes that are each an individual element. So you might literally see the swirly brush strokes of Starry Night swirling about before your eyes. In this way, you find yourself reawakened to color, shape, and light. You begin to see anew the artistry in everything your eye beholds.

And this is how I found myself mesmerized and removed from my own skin. I was released from the cares of my head with my eyes opened to the beauty of life around me. This is even stranger still given that, while I can appreciate his work, I wouldn't name Van Gogh as a favorite painter. So the work that went into this exhibit--the selection of which elements to "animate" and how to make the paintings move about and how to play with their color and lighting and the way in which the music helped to set up the emotional tone--was carefully executed, artistic in its own right. 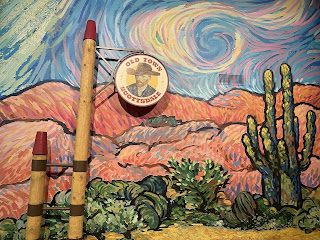 So while this is one of the more expensive art experience, if you have any interest in art it is worth seeing while it's still in town. Originally it was leaving this month; now it's extended until February.

Posted by Deanna Skaggs at 6:14 PM