Canal Convergence Lights Up the Night

A couple of years ago, when I thought about Old Town Scottsdale, I thought of the space south of Indian School Road. On the east side of Main Street were more shops and on the west side more galleries. But lately I've been spending more time above Indian School. There you will find more shops and restaurants and more of the coffee shops and dessert shops. There also, instead of the Civic Center Plaza (which is now closed off for its big refurb), you have the canal. 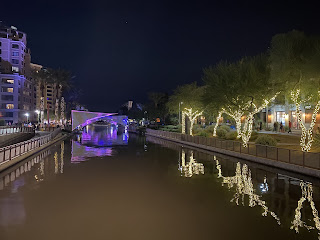 The canal is a perfect place to go sit or walk for a bit and enjoy the weather. It's a good place to go by yourself when you just feel like going somewhere but nowhere in particular, or a place to meet a friend. And sometimes there are also events going on. The Christmas lights were lovely last year. But I had never been to see Canal Convergence, which you will find running at night through the 14th. 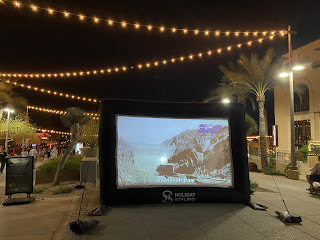 I admit I wasn't entirely sure what Canal Convergence was. An art installation and lights, something like that--but what exactly? There were a couple of installations nearer to the street on Stetson Drive, but they really didn't catch my interest. Approaching the canal, there was a big screen showing historic pictures of Roosevelt Dam. The dam and the canals are what allow water and therefore life into the Valley, so they're quite a cool thing to learn about and celebrate. 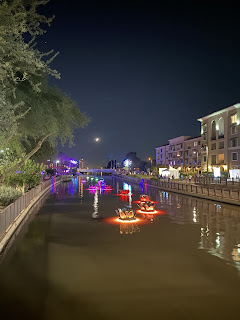 And then once you get to the water, the fun begins. They had giant, lotus-like flower lights set up in the water. They put into mind the footage I've seen of ____ at Disney World. And with the bright fingernail moon up in the sky, they were quite pretty. 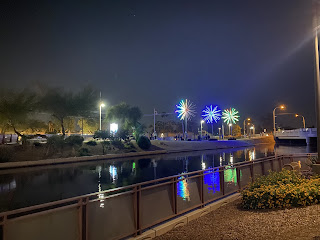 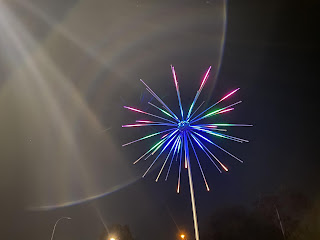 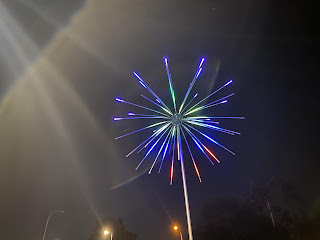 Off in the distance, you could also see what were like fireworks blossoming again and again in an eternal loop. The effect of these lights was in fact so impressively similar to real fireworks that I wonder if at some point they might come to replace fireworks in nighttime celebrations. 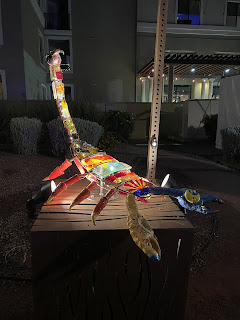 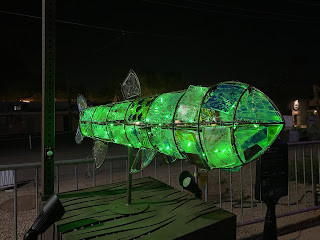 There were multimedia sculptures along the path of various animals. The scorpion was cute with an Arizona flag on its head, and the fish I liked because it was a brilliant green. The fish, of course, represents the fish in the canal that help to keep it clean. 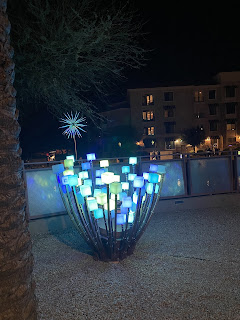 There were also these cool ice cube, marshmallow pieces that faded in and out of various colors. Further, each one had a scannable barcode so that you can control it using your phone. It's a fun, optional digital element that is more directly interactive than some.

Is there a lot to look at? Not really. But what was there was nice, and walking by the canal in Old Town is already pleasant, so adding in any sort of art or lights is a great excuse to make it a point to get out of the house and see what's up in town. If it's a simple walk to see some fun lights, I'd say that's quite a welcome way to spend an evening.