To Reach the Top

In the middle of the McDowell Sonoran Preserve, Tom's Thumb has long caught my interest. Before I even realized it was a place to which one could hike, I would stare at it while passing by on the freeway. The granite boulders, from that distance, make it look like the ruins of an ancient tower--especially given that the rest of the mountain, from that view, has no granite boulders. So those stand out as if they were brought in versus being part of the mountain. 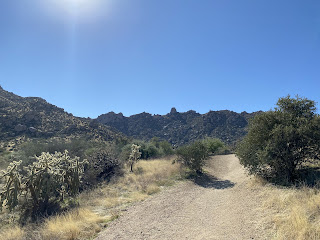 Hiking still is a newer thing to me. I'm still figuring out what my ability level is--and how that matches up to trail descriptions. Tom's Thumb I thought was out of my range. But not so. There are two ways to get there, the longer way through the Gateway Trailhead and the shorter way through the Tom's Thumb Trailhead. At around four miles, the latter is a similar length to the Gateway Loop, with which I've come to be very familiar. So a couple of weeks ago when the weather was nice and cool, I decided it was time to seize the moment and go. 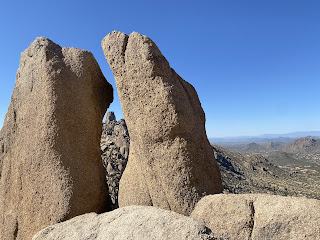 Terrain-wise, the look is more similar to nearby Pinnacle Peak. The backside of McDowell Sonoran (where the Tom's Thumb Trailhead is) has more of those granite boulders, whereas the Gateway side is more about sharp, dark, volcanic rock. From the parking lot, the Thumb looked so close, like I could reach it in twenty minutes (since this side starts off at a higher elevation). But of course the trail doesn't go straight up and distances look closer than what it takes to travel them by foot, so it took me about an hour and ten minutes to get to the top. 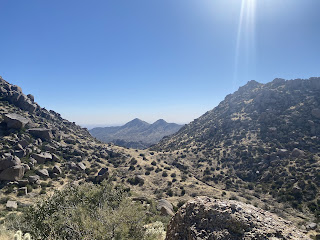 All the little look-points offer great views, though the extra few steps it takes to get to them can be reluctantly traversed when you're on the uphill. The trail was much smoother than the Gateway Loop, which has those aforementioned sharp rocks. But here of course the smooth gravel was also much steeper. Yet there's grace in that: because it's steep you can go as fast or slow as you like. And you know what, even though Pinnacle Peak is a shorter little route, I preferred Tom's Thumb (among other reasons) because it doesn't have steps. We people with shorter legs prefer to take small steps up the steep slopes than to have to be stepping so high onto pre-made steps. 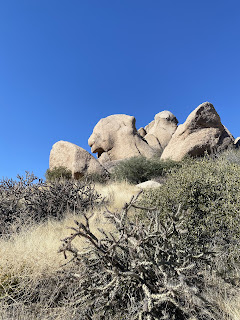 It was a pleasure to be able to see things I'd seen only in pictures and to get closer and closer to the treasured Thumb. Close to the top, this lion-profile boulder reminded me of the Cave of Wonders in Aladdin. 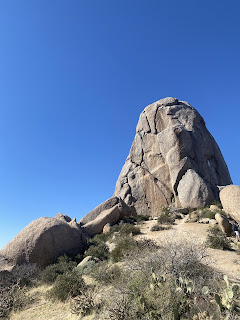 There's a certain power in having stared at something for a long time and then finally trying it and realizing it's well within your ability, after all. This was a beautiful hike, and each McDowell Sonoran trailhead has such different terrain and views that it's well worth exploring them all. To step out and see possibility and to step out and have the most pressing thing on your mind be the physical steps that you are taking--that's quite enjoyable and refreshing.
Posted by Deanna Skaggs at 12:33 PM