First I started the tradition of ordering something from Valerie Confections around Valentine's Day. Then I guess last year I added to the tradition by figuring that, while I was doing an order, I might as well also add in a small box of something extra, too. Last year it was the toffee. This year it's a Small Truffle Assortment. Instead of the usual white boxes, this set comes in a clear box that showcases the unique shapes of the nine truffles. There is a standard set of flavors, but their website lists that there can be variations based on availability. I got most of the flavors they listed, with just one that was different. 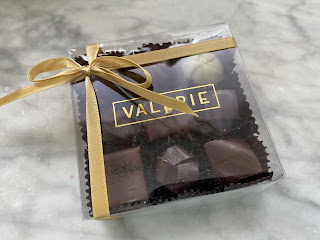 Liquid Caramel - This was pretty much a blind tasting, as I had no idea which flavor was which except of course for the one white chocolate. This dark chocolate, square shape with lines running across the top was the one I chose to cut into for a picture. Naturally I made the worst choice for cutting by unknowingly going for the liquid filling. But at least things didn't get too messy. I've had caramel from Valerie before. The sort of burnt sugar flavor goes well with the sweeter notes of the dark chocolate. 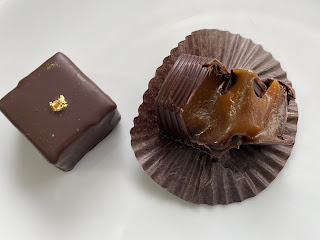 Scotch, Champagne - These are two separate chocolates, but I wasn't completely sure from tasting which was which. I'm going in order here of how I went through the box, so my second choice was the milk chocolate, geometric shape (the one in the top middle). It had a delightful booziness in a creamy silken ganache, so at first I thought it was the Champagne. But my next selection happened to be the milk chocolate square with slanted corners. It also had an alcohol flavor, but it was overall lighter and creamier. I'm concluding then that this was the Champagne (which I've greatly enjoyed before) and the first one was the Scotch (which I've also tried in the past). 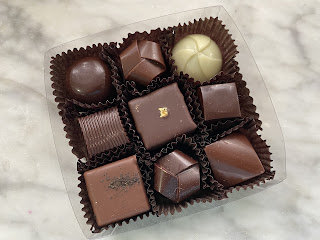 Earl Grey Tea - The milk chocolate square with black sprinkles did rather naturally have to be either the Earl Grey or the Jasmine Tea. I like this chocolate even more than the Earl Grey Petit Four. It's like a fresh cup of Earl Grey along with the creamy chocolate base. Stellar.
Mezcal Caramel - I was thrown for a loop by this one. I bit into what I'll refer as the dark chocolate twisted square and found the weirdest caramel with a stingy alcohol flavor. The caramel isn't liquid, but looks extra soft and has a layer of almost liquid type of caramel above it. And that flavor bit me right back. I couldn't figure out what it would be from the listed flavors, so I snooped around Valerie's other flavors and concluded that this must be the Mezcal Caramel. Mezcal fits in with the unique biting nature of the alcohol flavor. When it comes to alcohol truffles, I like to stick to classic Champagne truffles; otherwise, I'm usually out. So perhaps my complete distaste for this one would be delight and fascination from someone else who's more of an alcohol enthusiast. I would have much preferred to have the Moroccan Mint Tea (which was the only flavor I didn't get). 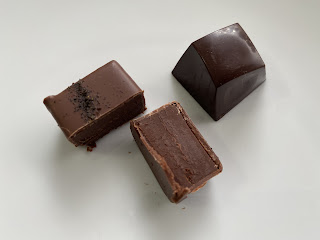 72% Bittersweet - This is the dark chocolate round, which contains a plain ganache. After the previous funky flavor, the simplicity here was a welcome relief. Even Valerie's dark chocolate comes on the sweet and creamy side, which can be pleasing in its own way when it's done like this.
Jasmine Tea - Here we have the dark chocolate version of the geometric shape. I'm a big fan of these unusual, yet still sleek, shapes; they add quite the visual twist. This tea flavor doesn't hit as strong initially as the Earl Grey does; here it takes time to build. But it's still nice and fresh, and the Jasmine works better with the dark chocolate base. A cup of Earl Grey can have cream and sugar in it, but Jasmine is usually served black. So the dark chocolate works as a better accompaniment. 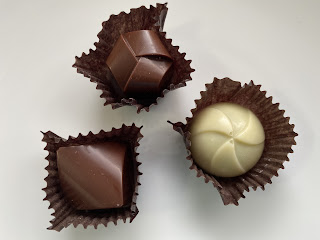 Matcha Tea - I saved the one that I for sure could identify for last. Obviously this is the only white chocolate, and inside is that distinctive green from the matcha. It's nice and creamy from the white chocolate. I don't know if I'm just so used to matcha these days (even though it isn't as though I have it often) that this didn't taste particularly strong to me. So perhaps that means this would be a welcome way to ease into match if you do find matcha a little strong in general.
Gilded - There was also this one, which is also identifiable from the fleck of gold on top. But I set it aside since I've had similar things from Valerie in the past. So no thoughts from me here except that the look is nice and classic.
There was such a variety of flavors here that it's no wonder my comments were somewhat mixed. Plain truffles, tea truffles, alcohol truffles, and the caramel. I can easily see most people preferring one half of the box to the other. I liked the tea chocolates best; along with the Liquid Caramel and the Champagne, they're the best display of what I enjoy about Valerie Confections. The Mezcal Caramel, on the other hand, was an unwelcome addition to what you might call the more feminine flavors of tea and such. So while a box like this is great for getting to try several flavors, just be aware of course that the variety might mean that you'll have some dislikes along with your favorites.
Posted by Deanna Skaggs at 6:51 PM