So you know how it's become my big splurge to dare an online order and get Valerie Confections for Valentine's Day? Well, this year I decided it would be good to also order a second box besides the Valentine's one. Said box ended up being the eight-piece Toffee Assortment. 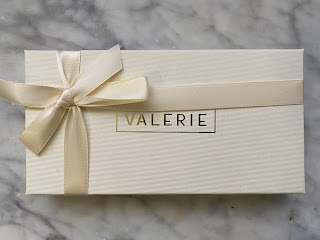 A plain cream-colored ribbon adorns the box. No holiday colors of pink and red for this one because toffee is for always and for everyone. Inside, the chocolate comes in big squares of dark chocolate with little decorative flourishes. Though the squares are big, they're fairly thin, so they appear smaller once you pul them out of their wrapper nests. And yes, each one is a different flavor, so let's just go down the list, shall we? 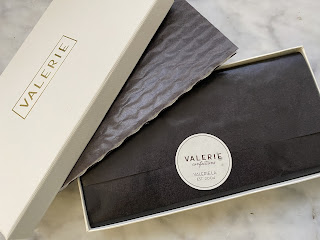 Almond - This one's easy to spot with that single almond on its top. The toffee is nice and light, not of the variety that feels so hard it might break your teeth. While I might have preferred some of Valerie's milk chocolate with the toffee, the dark chocolate pairs fine with the almond (and with most of these flavors). Almonds have a similar texture to toffee, and also aren't so strong as to win out too much in a competition for flavor dominance. So they fade into quietness when paired with the almond and seamlessly add a dash of flavor and texture. 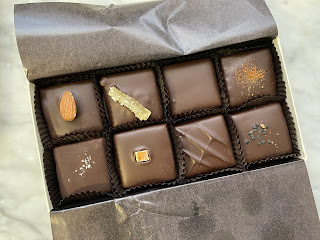 Almond Fleur de Sel - The salt that sits on here is good salt that works with the others flavors. Salt is, after all, often a companion to nuts, as well as to chocolate. You can see bit of almonds within the toffee, but the almond flavor isn't strong. So the effect is more of a salted toffee chocolate with just a hint of almond.

Ginger - As you can see, there's quite a big piece of candied ginger here. Not being one for candied ginger, I tried to keep it mixed in with the toffee and chocolate as much as I could while I chewed so as not to get it too much by itself. The toffee is paler in color than it was with the almond toffees and continues to be so for the rest. Certainly I personally would have preferred a smaller ginger topper. Yet it was still nice to try out; I've never had ginger toffee before. The bite that I had without the ginger topper had almost a sweet lemon flavor to the ginger that was at a more comfortable level of strength. That was rather nice. 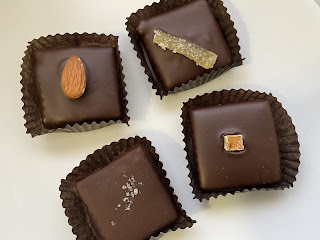 Orange - The candied orange topper, in contrast, is a tiny square. Even when you don't get the orange topper, you can still taste the orange oil. The effect is more light and floral than fruity and citrusy; given my liking of rose, I prefer the floral tone, as well as the more subtle flavor in comparison with the strong ginger. Maybe it was just this batch, but this toffee definitely seemed harder/more apt to stick in my teeth than the others. 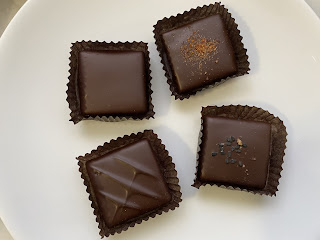 Mint - Instead of a candied mint leaf like you'll find on the Mint Mendiants, this toffee is decorated with gentle chocolate waves. Perhaps a mint leaf would be too much in this context. Though you can still taste the toffee, mint is definitely the prevalent flavor. Generally mint has to be paired with dark chocolate rather than milk, but with the toffee here you still get a sweet element. So this is a nice way to set up a sweet mint chocolate that also doesn't have that awkward flavor that mint milk chocolate generally has. Quite nice.

Classic - I probably should have started here, except that I followed the order of the box and this one is right in the middle. The plain toffee allows you to take in its flavor and texture; it's thin and soft (for hard toffee) and classic in flavor. The dark chocolate is a thin layer that adds just a dash of taste. 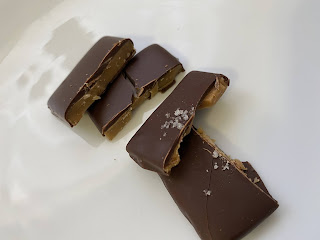 Pumpkin - The orange sprinkles on top I believe must be the smoked paprika I see listed in the ingredients. Pumpkin seeds are visible when you bite into the toffee. So you will find neither canned pumpkin nor pumpkin spices here; it's a completely different take. While pumpkin seeds are definitely a very recognizable taste and texture, like with the almond, they have a lot of competition from the toffee. Whether it is because there are more of them proportionally than there were almonds or simply because they have stronger flavor, the pumpkin seeds do have more influence than the almonds did. And you get a little bit of tang from the paprika. It's all very different from any toffee I've ever had before, and yet it doesn't feel "experimental" in a bad way. It's just unique. And while you can have it for autumn, this toffee doesn't need to be solely for fall, either.

Black Sesame Seed - The helping of black sesame seeds on the surface are just the beginning: there are lots more on the inside of the toffee, as well. So you instantly get a strong sesame taste and a bit of their crunch. I hate to end on a bad note, but this was easily my least favorite toffee from the set. That's a flavor preference, though; I don't like strong sesame.

I'm not used to so many flavors in toffee. Usually toffee is milk or dark, almonds or plain, right? I just thought I was getting another indulgence with this box, but it turns out that I got to go on interesting flavor journeys, as well. The Pumpkin and Mint were intriguing. The Orange and maybe also the Ginger were a good break from the plain toffees I've been used to. And the plainer, more classic flavors were also just nice toffee chocolates. Sometimes you can buy a box of just one flavor, but I'd definitely recommend getting the sampler first to see what you like best. It might not be the flavor you expect. And when else do you get the opportunity to try so many flavors of toffee?

Posted by Deanna Skaggs at 9:11 AM