Chocolove's Ruby Cacao Bar is not exclusive to Valentine's Day. I've seen it before, but I've avoided it because of the ruby chocolate controversy. I recommend this article from Nest & Glow if you're unfamiliar with the topic. Basically, ruby chocolate's marketing introduced it as a new kind of chocolate, a chocolate naturally colored like rubies and flavored like berries. As the article points out, though, it isn't that they discovered a new kind of cocoa bean: they just process it a little differently. The article claims, too, that there are additives that are in such minimal amounts that most countries do not require them to be listed in the ingredients--and even among those listed, you'll see citric acid, which they claim is responsible for the tanginess that, paired with the pink color, makes your mind think of berries. 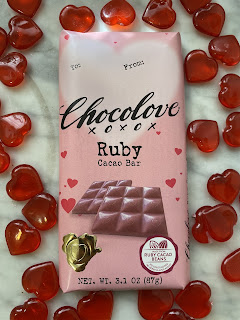 That's more of a summary than I'd planned to give. But it's interesting, right? That's why I've stayed away from ruby chocolate. Now that it's no longer new, though (basically I think it failed to take off as planned), why not take a look and see what it actually is like? We'll use the excuse of Valentine's Day frivolity.

The wrapper is properly pink, though plain enough in design to not be too frilly. What do you think of the To/From spots? They remind me of elementary school, but is that just me? Does anyone enjoy using them? Maybe I prefer them to be on the back versus up in front. 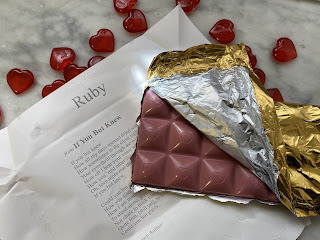 Inside its gold foil, the bar isn't really ruby in color. It's more of a very deep and dusty pink--almost mauve. It looks and feels almost waxy, which worried me a bit. The snap is good, though, like a regular chocolate bar. Now my impression was that this was more of a white chocolate (that is, made with just cocoa butter, as opposed to milk and dark chocolate that are made with cocoa solids, as well). But I see that the ingredients list both cocoa butter and cocoa liquor. The aroma, though, is strongly of white chocolate--that sweet, sweet, butteriness.

At first, the flavor, too, was like white chocolate. The texture is standard for a white or milk chocolate, as well--soft and leaning toward the greasy side. Another flavor quickly came up that did indeed remind me of bright raspberries. Then there was a tang more specifically like strawberries. Maybe I just have a bad palate, but I often describe chocolate in vague terms, and here I thought not vaguely of berries but specifically of raspberries and then strawberries. That didn't feel vague at all. Whether such specific flavor is the result of my mind getting tricked by the color, added flavorings, or indeed flavor from the cocoa, I don't know. I claim complete ignorance on this one. 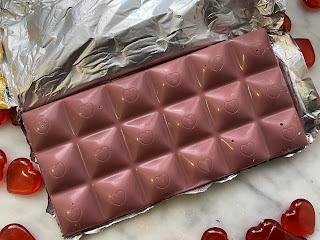 In reference to the citric acid, though, I have this speculation. If citric acid adds tang, when you put that tanginess together with the sweetness of a chocolate like this and a dash of cocoa flavor notes, that is very naturally going to call to mind berries. Berries are tangy and sweet, and cocoa does often have berry flavor notes. So to say that ruby chocolate is just flavored by citric acid is perhaps a simplistic way of describing what actually goes on--if indeed the citric acid is so heavily responsible for the flavor (which I'm not saying I doubt; it's just an interesting conversation).

So yes, I agree that the marketing was overdone for ruby chocolate. Even this chocolate bar comes with the little label in the corner, "made with ruby cacao beans," even though we all know at this point that there is no such thing as ruby cacao beans. With all of the growing interest in knowing about cocoa production, wouldn't it be cooler to go ahead and tell the consumer about how the process creates this color and taste? Oh, right, then it wouldn't be "exclusive" and anyone could make it. But anyone can make milk chocolate, and that hasn't stopped its popularity.

For myself, I'll say it's worth tasting. I'll finish off the bar. It tastes nice to me, though it isn't some rare jewel of a flavor effect. It's really sweet, so I wouldn't go for more than one or two squares at a time unless my sugar worms are feeling particularly voracious. The ruby chocolate controversy is still a controversy. But I don't think I'll avoid it anymore per se. If I happen on another product made with ruby chocolate that I'm otherwise interested in, I'll get it. And if I want to have a pink party for my niece or something, hey, I know I can where I can get pink chocolate.