I'll be honest, I'm a little disappointed with myself. After putting up my review of a box of Valentine's chocolate from Valerie Confections last week, I thought that would be it for the holiday. Sure, Black Butterfly has some beautiful offerings this year, but I have to pass because I don't have any other reason to go to Prescott right now. When I went to the grocery store this week, however, I came away with not one but four Valentine's Day products. After I'd photographed and tasted them, I found that I had mediocre thoughts feelings towards them all. 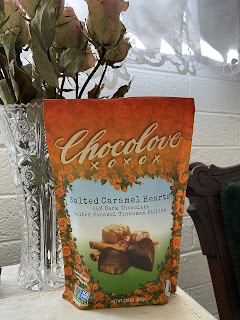 So why, tell me why, why did I get them just so I could review them? I have other, non-seasonal chocolate waiting in queue already. But I'll include these, anyway, just to show that I, too, fall under the power of marketing. And I'll include them also to show what did appeal to me and what did not. 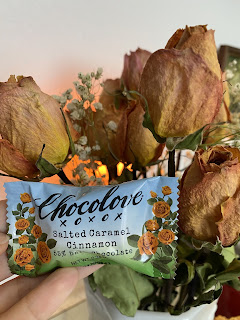 Although I've said I'm going to try and stay away from Chocolove's dark chocolate (as opposed to their milk chocolate) in the future, all three Chocolove products I picked up use their 55% dark chocolate. But you know what I couldn't resist, besides the seasonal quality? 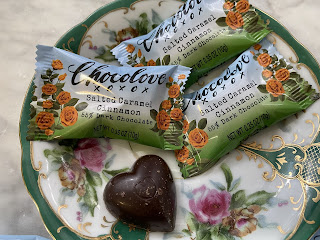 The roses. Although I also love the wildflower-looking flowers, too, roses are my first choice for a bouquet because I like to dry them and then keep them for years. Though the bags of Chocolove candy for past holidays have not scored too highly, these are great. Thick roses cover the edges of each bag, and the heart-shaped opening in the middle holds the imagery of the chocolate and its flavor elements. The Salted Caramel Hearts feature orange roses, cinnamon sticks, and caramel squares. The Very Cherry Hearts showcase red roses and ripe cherries. 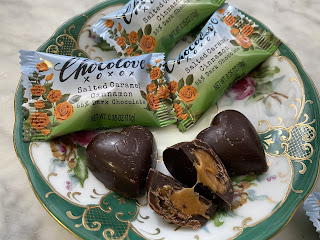 The same holds for the individual wrappers. Though they're the same design we've seen the past for other holidays, the embellishments this time are heavy enough to make the festivity work. The large amount of words fades against the pale blue background of the top half of the wrapper. The bottom half is green like grass, and the roses scroll upward from its base. Though the red roses are more classic, perhaps, I'm partial to the effect of the orange together with the green. 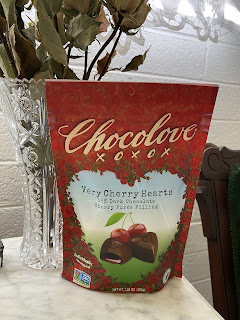 Inside, the simple heart shapes have Chocolove's usual logo on them. We'll start with the Caramel Hearts. They are in fact salted caramel cinnamon, not just plain caramel. But maybe it would be better if they were plain after all. The gooey, orange cream inside smells like cinnamon, which in itself is not unappealing. The cinnamon taste is strong, too, but it's instantly offset by a weird tang. Remember the salt? The tang is the salt. The salt isn't bad, as the cinnamon is not--but they do not go together. 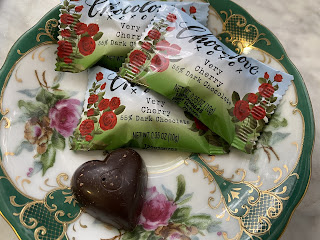 Salt and cinnamon and caramel together are too much. Pick one accent or another for caramel; this just tastes odd. And speaking of odd, it is strange that I find myself neutral to the 55% dark chocolate in this context, even though the heart shells are fairly thick. It's a sweet chocolate base that perhaps just fades in comparison with all of the flavors going on with the caramel. Because if salt and cinnamon weren't enough, a peak at the ingredients also reveals Ancho chiles and ginger. Granted, they mainly come together to amplify the taste of cinnamon rather than create their own flavors. But still, the point is that there is enough going on without also trying to make a salted caramel. Just because salted caramel is trendy doesn't mean it's necessary for all caramel to be salted. 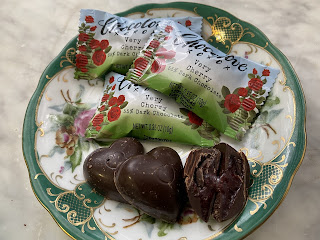 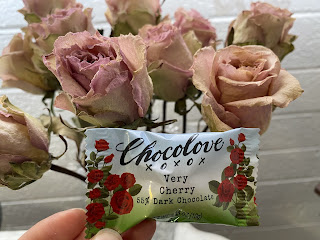 The funny thing is, I'm more inclined to give away the Very Cherry Hearts than the Salted Caramel Hearts. Even though the Caramels remind me slightly of pine cleaner, I can't taste the sweet dark chocolate in them nearly so well as in the Cherries. (And maybe also I feel better about giving away the Cherries because I know that's a personal preference, whereas I would feel bad giving away chocolate that I think tastes like pine cleaner.) I've been enjoying sweets lately, but these hearts, well, they're not the type of indulgence I like to prey upon. Good thing I bought more of Chocolove's Christmastime Hazelnut Latte Bites after they went on sale--those are more like it.

So the truth of the matter is that I ought not to have bought either of these bags of chocolate candy. I ought to have known beforehand that they would not appeal to me. The flavors sounded nice, though, and the roses, the roses really did it. So I'm not being entirely negative: I liked the packaging.

Posted by Deanna Skaggs at 6:21 PM