Reflecting on the Pilgrimage

I have grown too accustomed to always having about a hundred books that I own that I have not read. While I like having this home library to choose from when I want a new read, that is a bit too many, isn't it? So I've been trying to make my way through them and reduce the unread books to a lower number. I've owned The Pilgrim's Progress for years, and chose it to finally read now because I thought it would be a quick read. It was not. 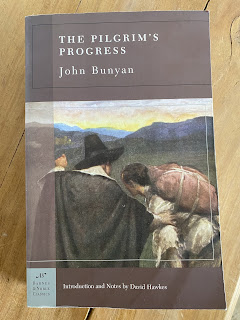 Though not something to read just for fun, the book is certainly worth reading from a literary perspective because so many other writers reference it. The one of these which I was most familiar was Little Women (side note: do any of the movie versions keep that theme?); she structures her whole book around the concept of a pilgrim's journey, comparing it to the journey of young women growing into adulthood. John Bunyan's book is also interesting to look at from a faith perspective--but specifically if you are interested in the history of different churches and schools of thought.

That was what surprised me most. The First Part was published in 1678, and the 17th century was certainly a time of, um, various opinions about religion. So if I thought about my history beforehand, maybe I would have expected it more. This is also the time that precedes novels as we know them today. So while there is some similarity to a novel, it is more like reading a set of philosophical discussions. I'd definitely, then, recommend reading a copy that has footnotes and/or endnotes to give context and interpretation. The language isn't too difficult if you're used to reading olderish texts (like perhaps the King James Bible, eh?). It's not like reading Paradise Lost. Oh, and The Second Part (even though I never even knew that there was a Second Part and don't think I had ever come across any references to it) I did like more than The First Part in many ways. But that would be its own discussion.

I don't really want to give a book review; I just had to put a couple of reactions out first. What I was more interested in for now was one aspect of the book's content and structure. One of the sometimes tedious elements is the way in which characters are constantly repeating what has happened before. They meet a new character and have to tell them for the tenth time what they've been though--and then the new character also tells how they went though something similar. And then they do it again a few pages later. Like I said, it can make for tedious reading, but it sounds familiar, doesn't it?

It sounds a lot like the first five books of the Bible. There is a lot of repetition there, as well. The laws are stated, then they're stated again. The history of the Israelites' journey is given, then it is given again. Etc. There is a theme there of repetition to emphasize the importance of remembering what has happened or what God has said. So Bunyan uses repetition for a similar purpose, as well. His characters look back on what has happened to them and what they have gone through or been delivered from. They remember how they made it through various travails so that they can have hope that they will make it through future ones, as well. And when they make it through something big, they sing a few verses in recognition of what they have made it through.

So even though it can be a little tedious to read all of the repetition, I think that is one of the things that stood out to me most from this book. It's like when people today talk of sharing their testimony: it reminds them of how they have been saved and it gives hope to others going through similar things. It is good to remember what has happened to us in the past. It is good to keep it in our remembrance how we have moved out of negative circumstances.