As I was meandering along, suddenly I noticed that there was a Gila monster a couple or few feet from me. It cared not for my presence; it was simply walking across the path. So I walked on, on the opposite side of the path from the (adorable) venomous lizard. 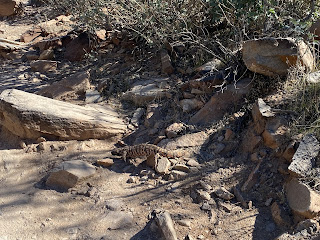 What a delight to see such critters. Lizards are a favorite of mine because of my bearded dragon at home (or perhaps I have a bearded dragon at home because lizards are a favorite of mine). So though a Gila monster is much larger than a bearded dragon, I delighted in the shape of its limbs as it stepped slowly forward. It seemed bigger and chunkier than the ones in captivity that are usually curled up asleep in their enclosures. And that's the gist of it, isn't it? 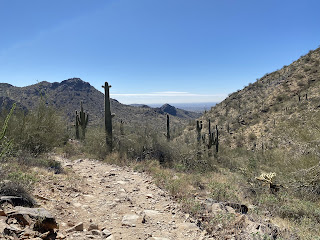 Have I been the Gila monster curled up in captivity? So now as I am struck by the lizard out in its true home, I think of myself stretching out, reaching out, stepping out. 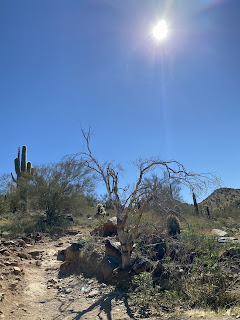 The breeze feels nice on a sunny day. Gentle inclines seem to matter little after you've passed the steepest ones. Ocotillo fill up with leaves after rain and lift their limbs up to the sun. 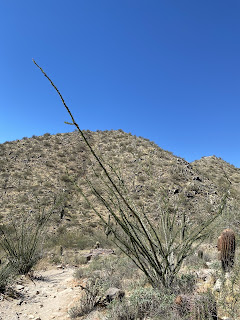 And maybe, just maybe you might catch some early ocotillo blossoms, the bright red tips on the green octopus limbs. So go on, walk across the metaphorical path, just like the Gila monster did. 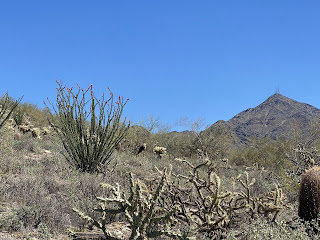 Posted by Deanna Skaggs at 9:21 AM