The Mountain and the Cactus

I was climbing over a little mountain. 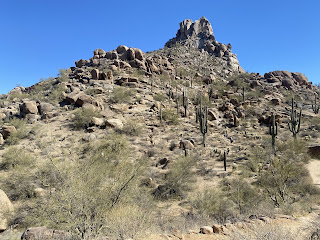 The path stretched up and around and down, then up once more and down some more, and then all back and over again. 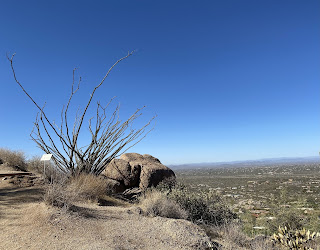 There were ocotillos, ripe with leaves after the rain. There were saguaros and teddy bear chollas in abundance. The rocks were mostly pale. 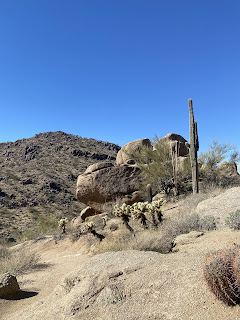 The sky was bright blue above me, and far away were the Four Peaks up against the horizon. 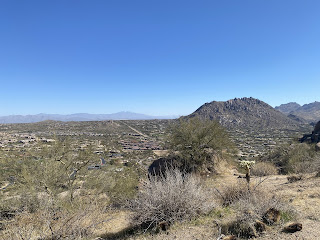 My feet paced over the dirt and gravel. I didn't mind the light inclines and declines, but the handful of steps that were as high as my knees did give me pause. I found myself not much taller than the children on the trail--except that I had not quite their youthful, scampering energy. So I paused for half a beat to look at the view or lean on a boulder. 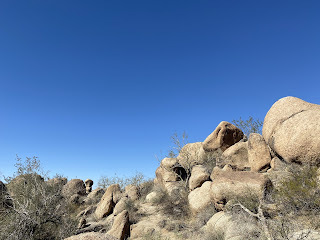 On the first part of my walk, there was a story--that is, a story not my own. Or was it? 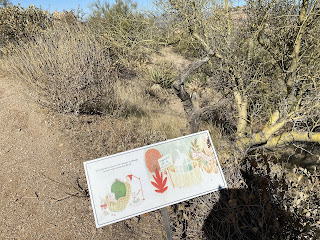 The slides told in words and pictures of a cactus. The prickly one who tried to be content on its own, until it realized it was lonely, and others were lonely, too, and maybe they it would be better if they could be together. 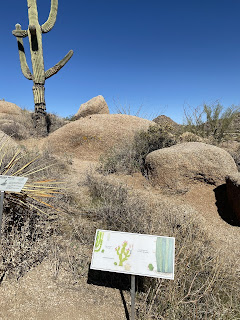 I smiled at the cactus in the pictures, and stretched my legs toward the next peak, the next bend in the path. Do you know what might be there?

In less than two hours, I had gone there and back again. I soaked in sunlight and perspective both.

Posted by Deanna Skaggs at 9:12 PM