I don't know if I've ever actually reviewed anything from Endangered Species Chocolate. If I have, it was so long ago that it was back on Chocablog. While they were one of the earlier companies to offer and promote fair trade chocolate, I don't generally think that their chocolate is good, therefore I stay away. But this Valentine's Day offering intrigued me. 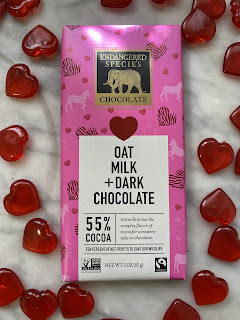 My store only had two of their three Valentine's bars on hand. The Vibrant Cherries bar they did not have, but the Tart Raspberries I avoided because I'm not overly fond of raspberries and because it was dark chocolate, and I generally dislike dark chocolate more than milk chocolate if it isn't at the quality level I prefer. The bar I chose is dark chocolate, too, but it seemed different. It's a 55% dark Oat Milk + Dark Chocolate. So I was thinking it would be more of a milk/dark blend in its effect. Therefore I thought that I might like it despite my previous experience with Endangered Species.

And similar to with the Chocolove candies earlier this week, I do like the packaging. Endangered Species has definitely taken a new look than what they used to have back in the day. Instead of the animal photography, the bars now feature patterns reminiscent of posh wrapping paper. So this bar is bright pink with zebra-striped hearts scattered among plain hearts and zebra shapes. It gets at the holiday and at the Endangered Species method all in one pleasing and fairly simple look. 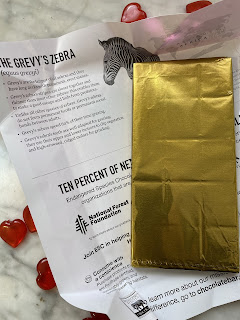 The bar is plain with the company's globe logo on each square. And of course the inside of the wrapper showcases some info about the company's efforts in conservation and factoids about the Grevy's Zebra that was featured in that wrapping paper pattern. The surface of the chocolate looks pretty good and gives off the aroma of marshmallow chocolate notes and also a light hint of oats. 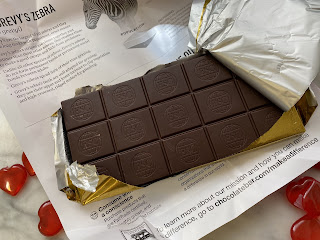 Notice, though, that the color is decidedly of dark chocolate, shattering any hopes I had of more of a milk chocolate/dark chocolate blend. While the hint of marshmallow notes to the chocolate are nice, overall it has what I call the Nesquick taste. That thick, gloppy flavor that some sweet dark chocolates have. This is the flavor I try and avoid. So let's talk about the oat element instead.

The use of oats is interesting. Oat milk is super popular of late, and it makes sense. Oats are earthy and yet sweet. Their flavor is both recognizable and welcome within this chocolate. Now oat milk is just water with oats. They didn't actually add oat milk to this chocolate bar; they just added oats. But just as oats themselves are no longer present in the final liquid product of oat milk, there are no oats-as-flakes in this chocolate. However exactly they were processed into the chocolate.

The reason I ponder this is because I'm still wishing for that milk/dark blend--and also wondering if it would be possible to make an oat milk chocolate. That is, a milk chocolate made with oats instead of dairy. I don't know enough about the chemistry of chocolate production (this is why I eat it but don't make it) to know if that's possible. But it definitely sounds more appealing to me than coconut milk chocolate. (Not that I mind just using dairy, but I know more and more people are interested in alternatives. Speaking of this, does anyone make goat milk chocolate? I'd love to try some.)