Me to We: Milk Chocolate + Confetti Candy

I'm just all about the fun chocolate these days, am I not? Instead of bringing in a chocolate bar sourced from etc. with etc. flavor notes, here I am with Me to We's Milk Chocolate + Confetti Candy. Confetti Candy? Maybe the truth is, I like candy more than I thought (no, no, this isn't true--I know I like candy; I love going to candy stories; I just know I tend to prefer to talk about or look at candy than to eat it). But Me to We is a respectable, fair trade brand, and I enjoyed my first look at them a couple years ago. 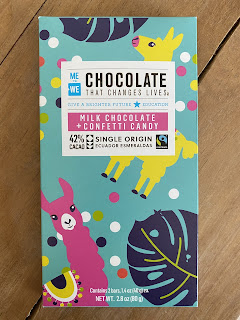 Me to We especially emphasizes children and education. So it's fitting that bars like this have appeal to kids, too, or the child in all of us that still gets excited about sprinkles (if I'm choosing a donut, I will probably choose the one with sprinkles, yes). The bright sky blue card box is sprinkled with confetti, leaves, and two llamas. It's colorful and bright but not too wild. Just fun. 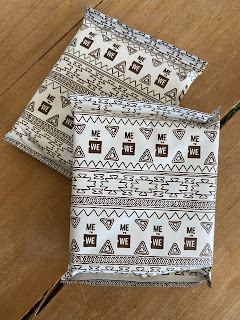 While last time, the bar I tried was smaller; this one is double the size, so it has two of the smaller bars, individually-wrapped, inside the card box. This can also increase the child target. A half bar is something you could put in a child's lunchbox. Two siblings could each take one of the bars. Or you could give your child one and keep the other for yourself. Or eat both and tell me to stop expounding on all the ways to eat a bar of chocolate. 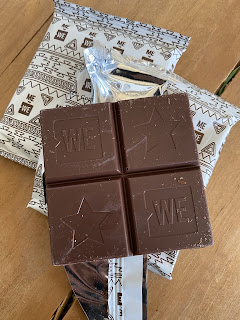 Unwrapping that patterned wrapper, each square bar is divided into the same four squares from last time with the same design as before, as well. Flip it over, though, and you'll see the promised confetti candy. And yes, it is different from sprinkles. These are little, round, hard bits of sugar in white, purple, yellow, and various other colors. As you can see, they're sprinkled with restraint; you'll find no solid coating of confetti here. That would not have a good effect on texture. 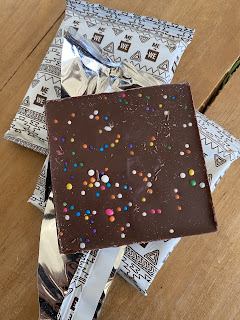 What's unusual is that there is a strong cocoa nib aroma to the chocolate, which is unusual for milk chocolate. Now, this is a 42% milk chocolate, so it is stronger than average. But I've never come across that specific aroma with even a dark milk chocolate before.

Trying the chocolate confetti down first, you can feel those smooth lumps of candy against your tongue. Then you begin to taste the chocolate. It tastes of cocoa and sugar, but more on that later. Trying confetti side up, the candy is much less present because you don't feel it on your tongue. So I'd recommend confetti down. Even with a small amount of confetti, there is still enough sugary crunch. Again, these are different from sprinkles; they're much harder lumps of sugar. What I don't know is what they're colored with: there are no colorings listed in the ingredients. This is an interesting way to put texture in chocolate, though. The obvious alternative would be to almonds or other nuts.

I spent a while trying to decode the chocolate's specific flavor. It's unusual, I'll tell you that. I want to describe it as being slightly watery, but that sounds unappetizing, which is not the case. The way that the flavor of the cocoa and sugar split into separate flavors naturally reminds me of Mexican hot chocolate a bit. But then there seems to be a flavor to the cocoa that is reminiscent perhaps of Ovaltine. I do see both dried milk and nonfat milk in the ingredients. So pure speculation, perhaps there is a flavor that I'm getting from the dried milk that gives the cocoa a unique edge?

This chocolate does taste milkier than usual for a 42%. But it sweetness comes almost more from the candy than from the chocolate itself. So it's a good thing that they went for a stronger milk chocolate so as not to be too overcome by sugar like they might have been with a sweeter chocolate. However you put it, I've enjoyed this chocolate. I appreciate a satisfying milk chocolate about as much as a good dark chocolate, and I like the fun element of the confetti candy, as well.

Posted by Deanna Skaggs at 9:53 AM

Labels: chocolate, Me to We, Milk Chocolate and Confetti Candy, review