Nearly ten years ago, I first tasted a Rose Petal petit four from Valerie Confections, and I've been wanting one again ever since. For the last couple of years, I've been making it my annual tradition to order a box of confections from them around Valentine's Day. This year, though, I found that I've tried most of the Valentine's offerings already. They do slightly different collections each year, but mainly with the same type of chocolates. So instead of getting a Valentine's box, it was time (at last) to order some petits fours. 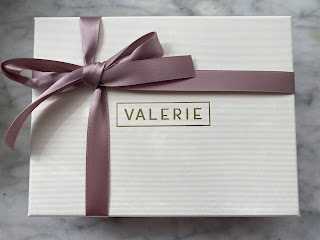 If you visit the shop, you can of course just get one petit four. Online, though, they come in boxes of twelve. So you can get "a dozen roses," that is, twelve Rose Petal petits fours, or you can choose other flavors. Fond as my memories were of the Rose Petal ones, I had to take the chance to try some other varieties, as well. I chose the Petit Four Bouquet, which came set with a sort of dusty-purple-mauve ribbon. At $55, these are well more expensive than a box of twelve truffles, but they're a special occasional indulgence. 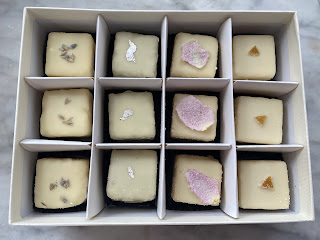 Rose Petal - Though not all of Valerie's petits fours are white chocolate, the four flavors in this set are. Like before, the Rose Petal comes of course with a sugared rose petal on top. I would definitely call it the prettiest and most visually unique of the four given that the other three garnishes are fairly common garnishes among fresh truffles. Or maybe I just have a bias for roses. The rose petal also gives a light texture to the soft cake because of that sugar coating. Combined with the delicate vanilla cake and the sweet white chocolate, the rose flavor gives a wonderfully feminine quality to these confections. It's an effect quite unlike anything else. 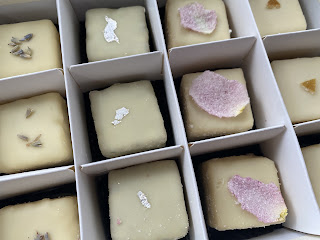 Lavender - The lavender on top also makes these an easy one to identify. Instantly, the cake has that sprightly, springy, bouncy flavor of lavender along with the sweetness of the chocolate. I like quite a present floral flavor, and this lavender is well-pronounced. If it's too mild, what's the point, right? As with all of these, the cake comes in three layers that are soft and not at all dry. And they're also not completely like eating a slice of cake because the layers are so thin. Each petit four is like a giant truffle, so they're not big. They're quite luxurious little layered sweets. 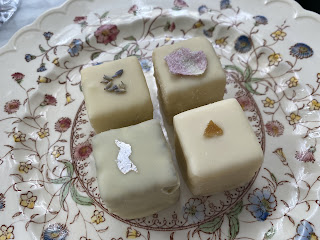 Earl Grey - This is the only one that isn't instantly recognizable: it's topped with a bit of gold rather than with Earl Grey tea. Gold is a better idea. It's also the only one of these four that does not white cake. I'm not certain, though, that it isn't still the same vanilla cake base as the rest have: I believe it's just colored by the inclusion of the Earl Grey. You can see little peppery specks within the cake layers. Earl Grey always makes for an interesting flavor to add to non-tea items because Earl Grey simply means bergamot added to black tea. And bergamot is citrus, so this is essentially just another citrus flavor in addition to the lemon coming up next. Two citrus and two flowers, is that really a bouquet? Well, bergamot and lemon also have flowers, so I suppose it works. Anyway. Bergamot is a light and bright type of citrus; it reminds me more of lime (which I prefer to lemon). That means that this Earl Grey makes for a nice bridge between the springy flavor of the Lavender and the more traditional citrus note of the Lemon. 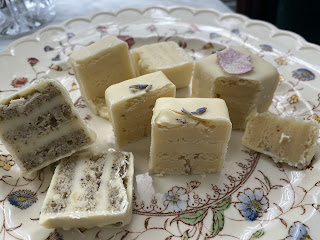 Lemon - I always balk a bit at lemon-flavored sweets and then usually find them much more pleasant than I'd imagined. Such is the case here. The lemon taste is light and sweet with just a delicate tartness that pair well with the creaminess of the cake and white chocolate. It's a very classic effect. Maybe because this time this was the new flavor, but this time it was the Lemon more than the Rose Petal that put me in mind of a Victorian tea party. 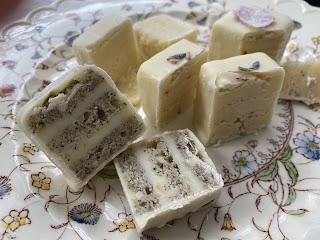 Did my memory of these petits fours hold up? Yes, I it quite did. Now, though, I'm strangely unsure about which was my favorite flavor. Normally rose-flavored things are most exciting to me both because I like rose and because it isn't the most common flavor to come across in the chocolate (or dessert) world these days. And they are beautiful. But I find myself leaning towards the Lavender this time. Maybe it's because of all the lavender products I took in from Los Poblanos last year, maybe they've left me with an extra fondness for lavender.