1) Tarte 360 Creaseless Eye Primer - I happen to have unfortunate eyelids that require eyeshadow primer; otherwise, one blink and the eyeshadow will crease. Mark by Avon and Merle Norman didn't work for me, either, so I was a devotee to Urban Decay's Eyeshadow Primer Potion. But I'm trying to buy more natural makeup, so when Tarte came out with a new primer that was getting stellar reviews, I had to try it out. Amazingly, it seems to work just as well. I still have the same eyelids, and I still wander around riding my bike under the Phoenix sun, and my eyeshadow still stays put. My only complaint is the tube format: I miss Urban Decay's applicator. But I've been using a small brush (I want to call it an eyeliner brush, but it's actually labeled a "smudge" brush) to apply it, and that has been working just fine. 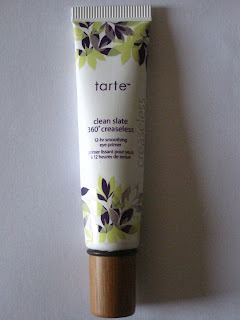 2) Eco Tools brushes - The "small brush" I use for the primer came from this set. Previously, I would use the same brush for all my eyeshadows, even if I was using four or so shades at one time. This little set of brushes makes it much easier to use a different brush for the different colors/parts of the eyelid. 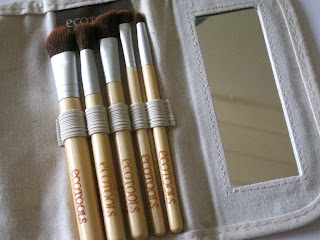 3) Vest - Here is my vest I rambled about a couple weeks ago. It's dark blue, it's linen, and most importantly is a vest. Cool people wear vests. Given that I am neither a fashion photographer nor a photographer in general, it doesn't look at all right in the picture, but at least you can get a general idea. 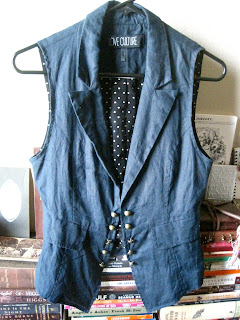 4) Candles - I once heard a quote about how candles are for lighting, not dusting. However, I only learned this month the truth of this. Candles lit in the evening make a room much softer, whether or not you have other lights on. They're a sign of warmth and nature and home. 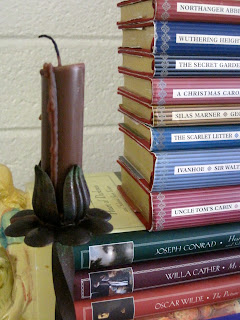 5) Green glasses - I had a trip to Anthropologie a few weeks ago (when I bought the vest) in which, as I related in later conversation, I slipped and fell. I caved; I said that coveting isn't good, and therefore I ought to buy the green glasses I had been eyeing for months. I only bought two; two is technically all I need; probably I would never buy them if I waited until I could buy a larger set of them. And I'm in love with these beautiful green glasses: they're so magical. 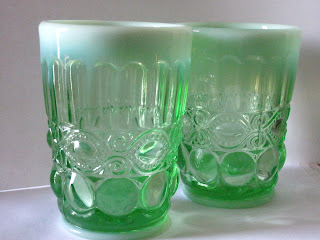 6) Blue oven mitt - Technically, it's a pot-holder, but I never use regular oven mitts for taking things out of the oven, so I always call pot-holders oven mitts because that's how I use them. I chose this one during the same Anthropologie trip, as a part of the redecorating I was doing. There's nothing like a spot of color to brighten a very dull kitchen, such as mine previously was. 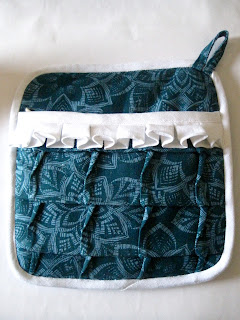 7) Blondfire's "Waves" - After my rambling when this song first came out online, I have returned to listen to it at least every other day. It's addicting, and it provides the perfect balm for when I'm feeling my own waves of stress and tiredness and need to remember where this moment can end up leading.

8) Coin necklace - A thrift store find, I have no idea about the actual characteristics of this necklace, except that it looks like a coin with the Queen that is fitted onto a necklace. Monetary value? I have no idea. Value as a random accessory to add some flourish and uniqueness to an outfit? Definitely there. 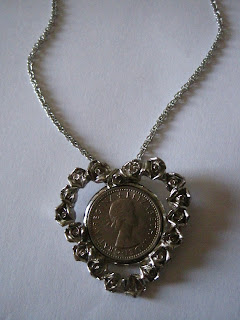 9) Get Smart - As I've mentioned, I've been watching a little of this show lately. It's perfect ridiculousness, is what it is. Though I've seen every single episode, still it's a comfort to go back and laugh at all the silliness. There's just something about TV from the sixties.

10) New Jane Eyre copy - I might as well build a Bronte shrine of books, right? Once I had three copies of this book, it started to become addicting. This hip, lavender cover caught my eye at Costco--it's a great way of redressing a classic, and a great addition to my collection--now where's my fifth copy? 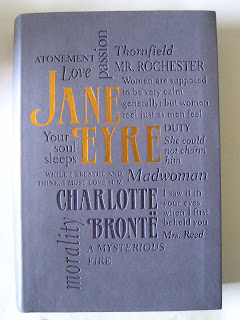 Posted by Deanna Skaggs at 1:08 PM