Last week, I let you know about Kaleb Nation's upcoming novel, formerly known as the Secret Kaleb Book. Well, guess what? It now has a title, release date, and more detailed summary. Secret Kaleb Book has transformed into Harken. 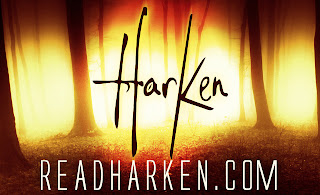 The release date is less than two months away on January 13 of 2013, which is much sooner than I was expecting. This is for sure one I'll be pre-ordering. Here is Kaleb's announcement video:


I've also been able to catch a bit of the livestream tonight celebrating the title announcement--if you hurry, you may still be able to view some of it on YouTube. And though I could probably say more, I will wait until the preview chapters have been released (which you can sign up for on the readharken website.
Posted by Deanna Skaggs at 8:50 PM