Kaleb Nation is great at marketing.

If you don't know who Kaleb Nation is, let me just briefly say that he's an author, blogger, and YouTuber--click on his name in the tags at the end of this post to read my other posts about his books and such.

Two years ago, he did a "30 Days to Bran" promotion where he made a video every day for the month leading up to the release of Bran Hambric: The Specter Key. The newest Nation project has been going around the name of "Secret Kaleb Book." You can hear a little bit more about it by watching one of Kaleb's videos on the book here. While it's exciting that the actual title will be revealed in less than two weeks, I think some of us will feel sad about leaving behind our secret, insider nickname. As a way of building up for the novel, people have been tweeting pictures with the name, usually written on their hands, along with the book's slogan of "don't trust anyone." So I had to join in on the writing-on-hands fun, too: 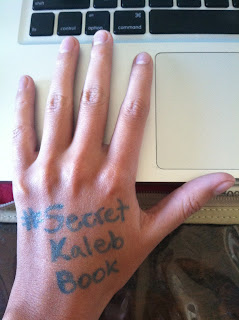 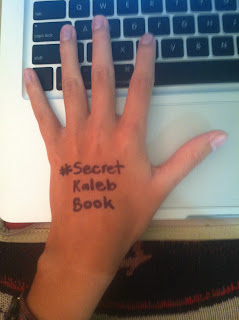 You'll notice that my writing-on-hands skills improved on the second try, though my photography didn't. Anyway, it's exciting to see this happening: it's books approached by the modern audience, a type of marketing that wouldn't have taken place not just two hundred years ago but ten or less.
Posted by Deanna Skaggs at 6:08 PM