He's like a cross between Oliver Twist and Wolverine, with a little of Shasta from The Chronicles of Narnia. So many readers are already familiar with him, but despite having grown up hearing about Ender's Game, I didn't meet Ender until just a few days ago. And what a wonderful character he is.

In fact, in a roundabout way, it was because of Ender that I finally read the book. Summaries of it never interested me, whether because they used the words "battles" or "video games." But Asa Butterfield was perfect in Hugo, so when I heard that he'd been cast as Ender, I started to get curious. Ender and Hugo (who might be called a mix between Oliver Twist and the Artful Dodger) have certain things in common, except that Ender has a greater sense of (or need to cling onto) morality and also is deadly. 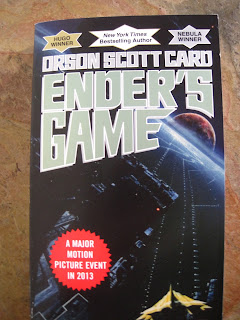 A deadly Oliver Twist. Who'd have thought he could keep the reader's support just as much as an innocent Oliver Twist? This plot revolves around us backing up Ender. While much of the content is about mock battles (which, you know, I have very little interest in), it's what happens in Ender's mind that matters. I can see why this book has such a following. It's one of those books that, if it grabs your interest at all, it's because you connect with it in some way. And there are so many themes, messages, and conflicts that you can pull out of the pages.

War and what it means to be a soldier. Patriotism, even. Corruption. Authority. Video games, if you like, although I didn't really think of them that way. Logic versus emotion. Kindness versus efficiency. Compromises and sacrifices. Friendship and isolation. Role models. Teachers. Teaching. Bullies. Rebellion.

But one thing I got from the "twist" at the end was the importance of always taking life as reality. All our actions, no matter how they seem, have meaning--even if we don't know it at the time. I also particularly enjoyed the dream sequences and how they built up around Ender's desire not to be a killer. His complete dislike of hurting others, despite how well he can defend himself, made for a compelling conflict. There were a few times that I just wanted to weep for Ender.

So the movie comes out in November. Do you think I'll have finished all the (available) books in the series by then? The next three are already here waiting for me.
Posted by Deanna Skaggs at 10:13 AM