There's something about the Sarah, Plain and Tall movie trilogy that gives off a positive feeling. It's a prairie story filled with heart in a subtle way. Although I considered it, I never got around to reading the books by Patricia MacLachlan, likely because even by the time I was watching the movies I was already above the books' age group. But as we readers all know, age group shouldn't matter--not when a book is good.

The first book is a mere sixty pages, the second and third ones each a little longer. I somehow, however, ended up spreading out the reading of the first book over the longest period of time, whereas I finished the last book within one day. So they are short enough to be friendly for younger readers. But there's a quote in the second book, Skylark, that also made it into the movie that I find applies well to how these books are written. It's the quote about when Sarah read Jacob's letters and fell in love with what was between the lines. That's how these books are: plain and simple, yet vastly poetic and heartfelt words. 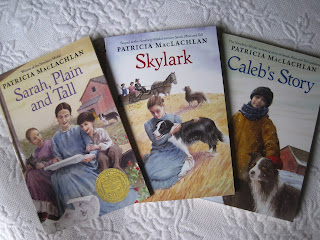 The basic premise is a family whose mother died when the son was born. About six years later, the father puts an add in the paper for a wife; Sarah comes from Maine to their farm. The time period is what, 30 or 40 years after Little House on the Prairie? So it's a prairie story, but slightly more modern and less focused on describing the setting. It's more about the characters. The first book maintains a very simple and sweet plot. 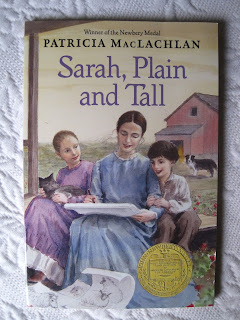 I enjoyed the second one most. The pull between lands, the dry prairie and green Maine, creates a poignant personal and cultural conflict. As someone living in a harsh landscape that I have also come to love, this was something I could really relate to. It's also a theme that develops any time a person finds a new home. 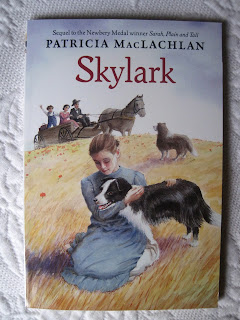 Caleb's Story, which in the movie version is called Winter's End, moves the perspective from Anna to Caleb. Like the other two books, it's much like the movie, minus certain details. The movies fleshed out conversations and such, especially between Sarah and Jacob. In this story, the focus moves back to storytelling, words, and creation; as Caleb takes over keeping the family records, he discovers what these mean. And so does the reader. 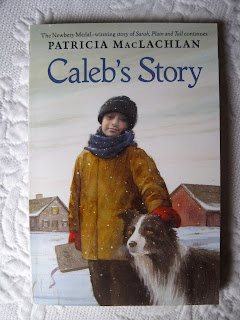 These books are refreshing. Nothing is overdone, everything matters, and you're left with a feeling of contentment--whether you're in elementary school or long out of school.

Posted by Deanna Skaggs at 7:03 PM