I currently have three little, chocolate-goodness presents from Santa Fe. Santa Fe's chocolate scene isn't too bad--certainly I find it better than Arizona's. This includes companies based in Santa Fe, in addition to the chocolates that are available to purchase there. The first item is a $2, silver-wrapped chocolate fig.

The Rabitos Royale figs are made by a company called Productos la Higuera that began in 1989 in Spain. The figs were their first product; now they also have a version that includes orange. In addition to crisp photography on the company website, there is also a model of their figs. The dried, mediterranean figs are filled with "truffle liquor cream" and covered in chocolate. That's right, there's brandy involved, as is quite apparent when opening up the little package. 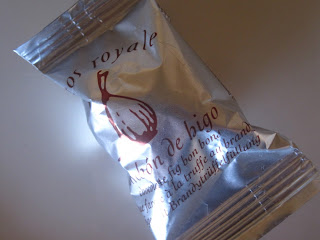 Since my fig had to travel a few extra miles to get to me, it wasn't the prettiest on the outside. The inside, however, looks better. A ring of fig seeds snuggles next to the chocolate coating, with lush truffle cream in the center. When you bite in, the fig portion is chewy against your teeth and the seeds crackle softly. The chocolate melts and the truffle center spread its flavor breathlessly. A diverse, yet non-shocking, combination of textures within a small space. 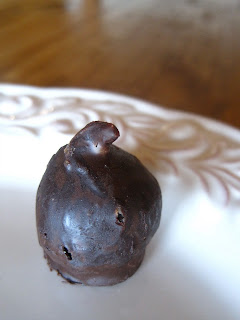 Although the brandy scent was strong inside the packet, the flavor isn't. This isn't a boozy truffle, nor is alcohol the strongest flavor. I would put it second to both the fig and the chocolate. Probably the fig comes in first, if only because its texture begs extra attention. 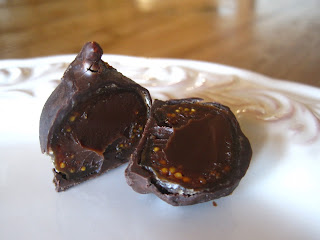 I feel like Americans only eat figs in Fig Newtons--am I wrong? If you come across a Rabitos Royale fig, try it instead for a little luxury. And if you think of it as a truffle (a largish one, too), $1.95 isn't steep in comparison to other truffle prices.

Maybe buy a few, set them up as a dessert plate with some cheese. Sit over the table, letting the chocolate slowly melt with the shape of the conversation. Or bring them outside to match the warmth of the cocoa to the red of the sunset. Let the seeds match the stars cropping up in the sky, and close your eyes.
Posted by Deanna Skaggs at 9:22 AM