The Phantom Proceedeth with Menace

As many others, I have been entirely enjoying Ian Doescher's William Shakespeare's Star Wars series, which started with Episodes IV through VI. I was hoping he would do the prequel trilogy and look at this, all three come out this year, starting with The Phantom of Menace.

Let me get it out of the way: I think that both the original and prequel trilogies, as films, have strengths and weaknesses, so I am willing to defend either trilogy as the need may arise. So I was happy to see that the prequel stories are getting the same treatment as the originals had. In fact, they're even getting better treatment: back when Ian Doescher started with the first book, it was a stand-alone type of thing, it was sillier, and the dialogue was much more similar to the lines in the movie. With each book that he has created, however, he refines his technique, adds more to it, becomes more subtle, and makes something that is greater than a silly diversion. 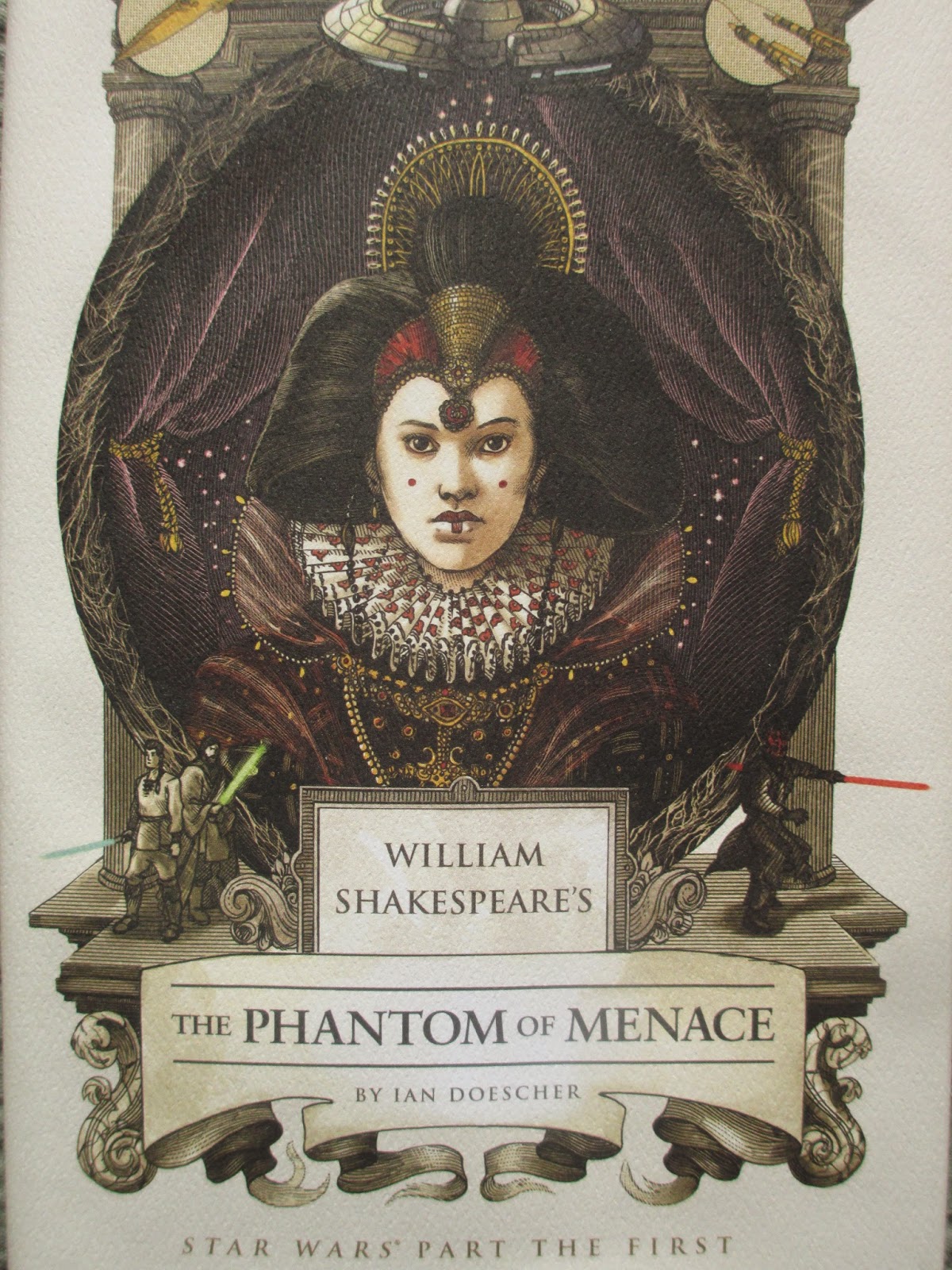 The Phantom of Menace didn't make me giggle as much as some of the others did, and I didn't mind because I had slowly been transitioned into something new. What began as a novelty has become something grand and poetic in its own right. Borrowing Shakespeare's flow of language and vocabulary, Ian Doescher has seamlessly transition the world of Star Wars into the world of an Elizabethan play. It's seamless--it really is. The language is just right and better than ever: not only are the existing lines given a Shakespearean twist, but there is also more bulk given to each line. Characters take a moment to reflect on the meaning of their situation, or the meaning of something that has been said--not just to deliver their lines; that's very Shakespearean.

And then there is the content. When the form moves so much into this Elizabethan feel, the content is not the thing to hold it back; rather, it helps it along. Episodes IV-VI are a wonderful, classic story. But Episodes I-III are more complicated and more tragic--and that is perfect for Shakespeare. It's a very political story and a very social story, with dramatic character relationships. If ever you doubted the worthiness of the prequel trilogy, please read this book: it will make you realize, if you have somehow not realized it before, that there is plenty of meat behind the computer effects and Jar Jar Binks.

Speaking of Jar Jar Binks, he is one of the biggest changes in this book; he is, if you will, the silly element. Except that, while he is a silly character in the movies because he's mostly a comedic character, he is the silly element in this book because he is made smart. He is smart, but only feigning simpleness because he knows that is what other characters expect of him and so that is what will help him achieve certain ends. It's smart because it solves how to not let him be annoying. And it's smart because the idea of dual identities makes sense for Shakespeare (everyone is always disguising themselves in his plays) and for the story (Padme disguises herself, Palpatine disguises himself, even Darth Vader is later disguised in a certain sense).

It's like all of the wonderful things about this story have been taken and polished into Shakespearean language and then given to us as gleaming lines to remind us of why this story is one of the best ever. I love Star Wars.